Hit By The Storm

I tried to get some time in on a plains lake outside of town and was promptly hammered by high winds and an approaching storm. As I arrived it was apparent the edge of the storm front was right over the lake. I managed to cast for a while but there was nothing going on fish wise. The three weight was definitely overmatched in the wind. I saw a couple seagulls have success at least and salvaged the evening by watching some shorebirds and nesting canada geese. 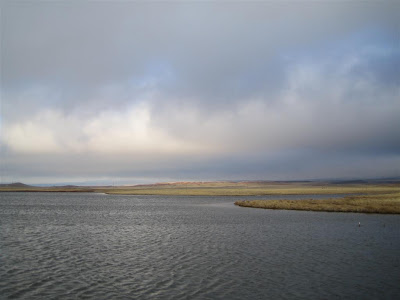 Posted by wyoflyfish at 8:10 PM No comments:

The river has been rising with the recent snow and rain. Combine that with the start of runoff and its off color and starting to make you choose your wading paths carefully as the power of the water steadily rises. Eric was in town for a visit this weekend and we headed out early, driving through the rain and snow to get to the canyon trail head. Buggers and streamers were the order of the day. The fish were taking the big stuff so we were happy to oblige and ended up having a great time working the slower water for browns taking respite from the building runoff.

Floyd and I met up at a little reservoir outside of town to try the waning light dry fly action. We had plenty of takers but they were so small it was nearly impossible to hook the little buggers. It's so nice to have local water close enough to spend an hour on enjoying the evening air and watching the midges dance on the surface of the lake.

Rings from rising fish in the reflecting sunset 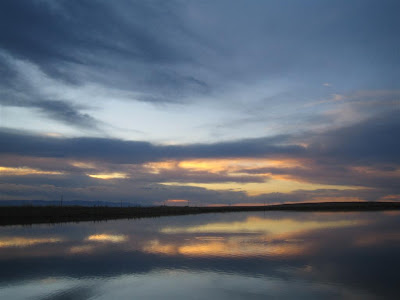 Floyd working the water as the day fades 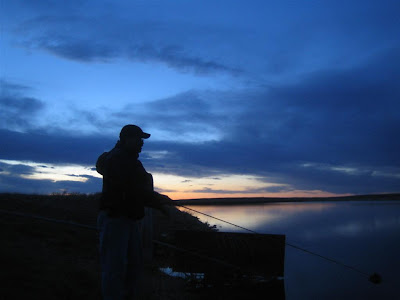 First Dry Action Of The Year

I had some time at the end of the evening to spend casting about on a local lake. I blew about 20 minutes messing around with nymphs and picked up one little stocker on a midge, until I noticed the fish were starting to really rise as the sun was dropping in the sky. Switching over to a parachute ant pattern turned it into a strike every cast. The fish I landed were all stocker rainbows about 8 inches long. Quite a hoot to pick up some fish on a dry though for the first time this year. They would chase the stripped fly on the surface repeatedly striking away until you either hooked them or ended up recasting. Not a tremendous challenge, but a great way to spend an hour on the water while tickling your funny bone from the amusing antics of these little fish.

Lake was full and looking good

One of the "little gems" 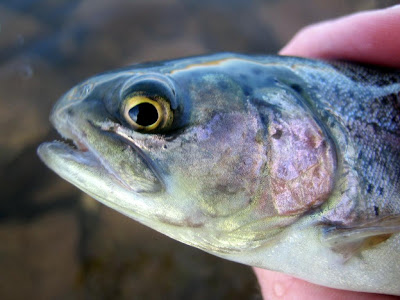 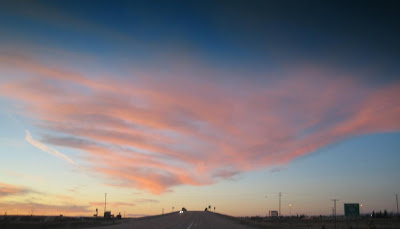 Posted by wyoflyfish at 9:07 PM No comments:

Mark and I met up for a pleasant Sunday in North Park. They never received the pounding snow storm the rest of the region did and the trip down and back was easy except for a small amount of ice on the road in the morning.

We worked looking for some cutthroats early in the day. Mark managed one small cutt that had probably been planted this past fall and I couldn't swing any cutties. The rainbows were around however and the fall planted trout were consistently dancing our indicators. We managed a couple better fish throughout the day with Mark landing a 20 incher to top the day. The best days are coming for the north park reservoirs as the high temps this week should really get things going.

Mark battling away with an ice out trout

Mark with a nicer rainbow 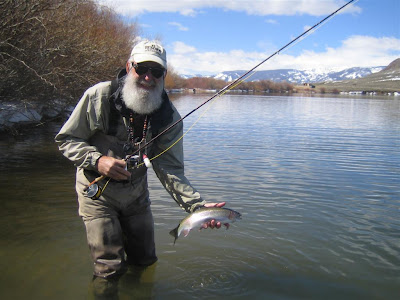 A rare photo of me with a trout thanks to Mark 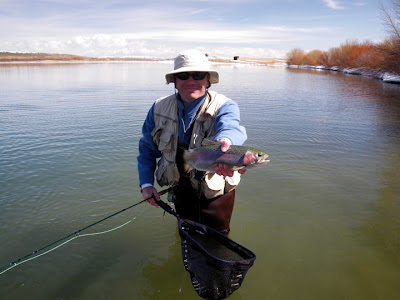 Mark's nice one of the day 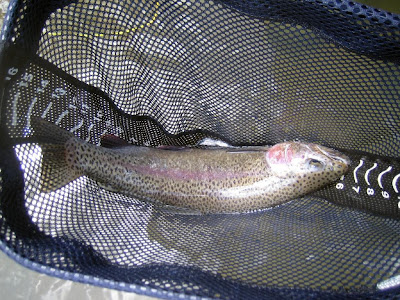 We had a beautiful red fox that decided to hang around the backyard for some lounging and a nap. Typically we see them on the move, coming through the area quickly while hunting, but this one just seemed to want to relax. 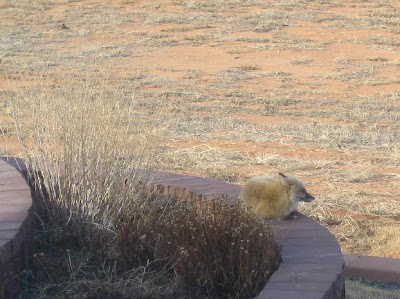 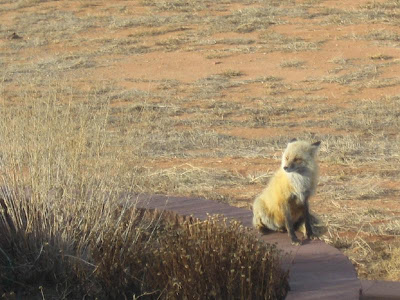 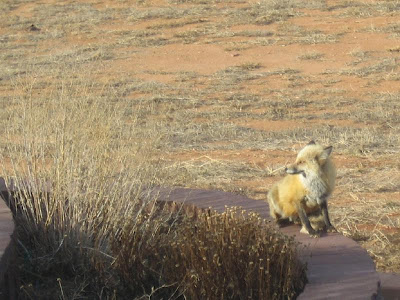 You often hear tales of the fertile reservoirs in South Park. I have fished up there a few times in the past, but I have never had such a rewarding and satisfying day as this Saturday. Marc was kind enough to fill me in on the current state of the area and his information was invaluable as he put me in the right place at the right time with the perfect fly.

I managed to land my best rainbow of the year and I got to tangle with the biggest rainbow trout I have ever hooked in my life. After starting the day with a nice 18 inch rainbow, I immediately hooked my second fish of the day. They are so powerful and thick bodied up here they jump and freight train you to no end. After landing him, I went to take "my fly" out of his mouth and it wasn't connected to the leader anymore. I thought, "oh, he broke off right in the net"....but wait this isn't my fly?! It was another scud.... so I find "my fly" again and remove it and throw it away to the side, thinking its attached to the leader. WRONG... it was ANOTHER earlier break off from someone else. Finally I got mine out as the third fly in his mouth. This fish was a powerful fighter and the evidence was clear as to what he had done to others in the past. I felt pretty fortunate to have landed him.

Every fish up there is deep and fat, that is how it was the entire day.. consistent deep fish. I did have my license checked when I went to the car to retreat the wind for a little break. It was nice to see the DOW out keeping an eye on things.

Towards the end of the day, I hooked, fought, and lost a complete beast. The fish looked like a giant chromed tank leaping time and time again from the surf. I did everything I could for about five minutes of battle, just trying to gain some sort of headway. It was a leaping powerful slab that seemed to have complete control of the entire situation. This was the first fish I have put on the reel all year, and it was the most drag screaming I have heard from my mid arbor ever. Finally the fly just came loose, the five weight breathed a sigh of relief, and he was gone. The whole thing was just wicked awesome. I lost the fish but still can't help but feel really satisfied from the whole experience. It was by far the largest rainbow I have ever had the luck to hook.

I ended the day with a few more healthy rainbows and then on the way out chatted with a float tuber who had been intently watching as the only other fisherman around when I was doing battle with the slab. He was a nice fellow down from Boulder.

All in all, this was one of the most satisfying days on the water I have had all year. What a tremendous resource there is existing in Colorado. I don't think many people realize what they have right there in their own backyards. I will certainly be back when circumstances allow another trip to south park.

My best of the day (and year so far) 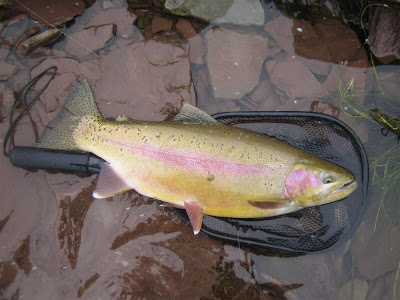 I took a fast trip to a southern Colorado stillwater for a little afternoon break while traveling. The water was still quite cold and my hopes of any real warmwater fish action were quickly squashed. I still gave it a shot on the off chance I might get lucky and find some bass or bluegill lethargically feeding. No warmwater fish, but I managed a few takes and a little stocker rainbow that had broken off someone else's terminal tackle. I clipped the mono he was dragging around with a split shot attached and back he went. At least I discovered a pretty little lake that has potential for bass later in the summer and it has close proximity when visiting family. 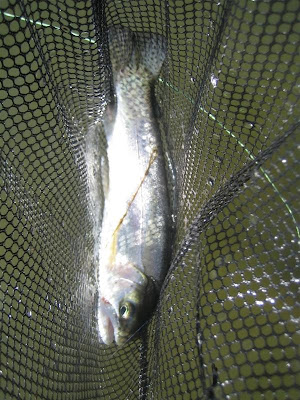 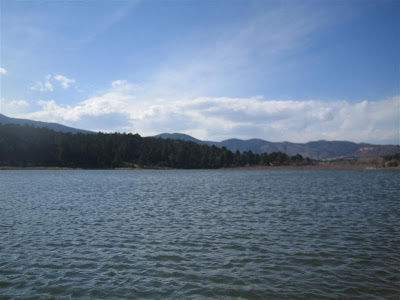 Posted by wyoflyfish at 7:28 PM No comments:

Adam and I took advantage of one of the breaks between storms to head for the river and explore in search of trout. Both of us needed a day off and the midweek timing seemed to mesh with all the natural happenings of spring. The cranes were in nesting and the bald eagles were circling always watchful for any chance at an easy meal. We managed to find a few trout and also one white sucker amid the riffles, runs, and pools of the big water. The sun warmed us enough to make what wind there was tolerable. In a moment of carelessness I broke the top two feet off my fly rod. We were too far up river so I continued to fish with what was left the rest of the day. Thank goodness for weight forward lines. The trout seemed to be taking buggers when they were on the feed but overall the action was rather slow.

Battling a side channel trout 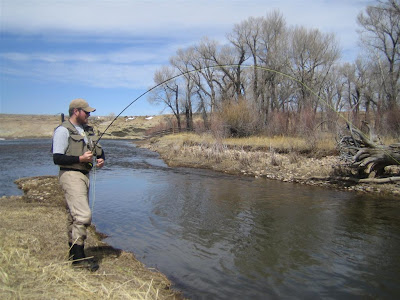 Adam with a nice river brown 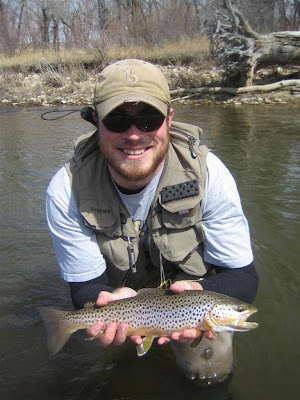 A native sucker before breaking the rod 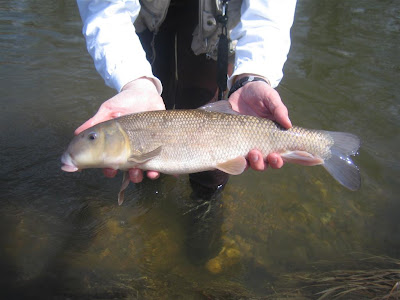 This tree has seen a lot on the river 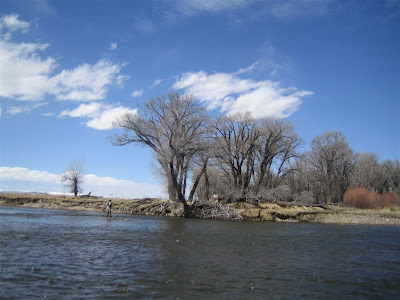 Working a riffle with a nice drop off 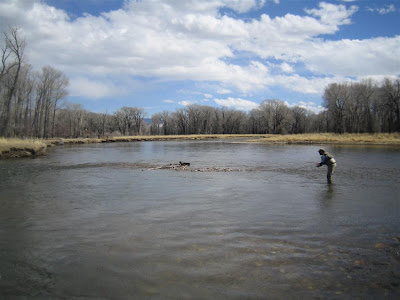 On the way back to the car we saw our fourth coyote of the day as we startled him from his curled up nap, basking in the warmth of the river bank cliffs. We had a late lunch with a nice red ale and decided to try out some area stillwater. The ice was completely off and we began taking trout almost immediately upon arrival. Some healthy browns and rainbows were found and they put a good bend in what was left of my rod. A quick storm rolled through but the fishing seemed better on the back end of it. A fine day full of relaxing walking, beautiful scenery, and some quality fishing. Now to see about sending in a rod for repair.

Stillwater brown... my first brown ever from this particular lake 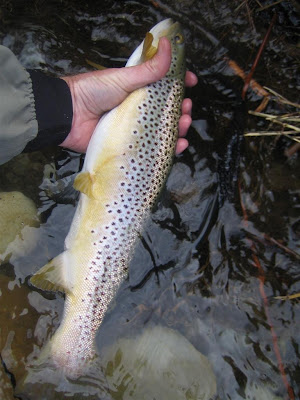 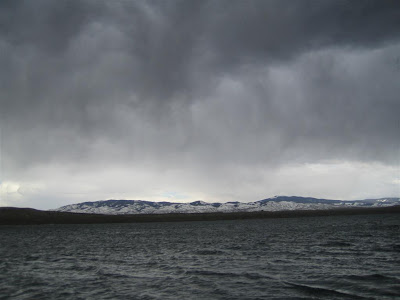 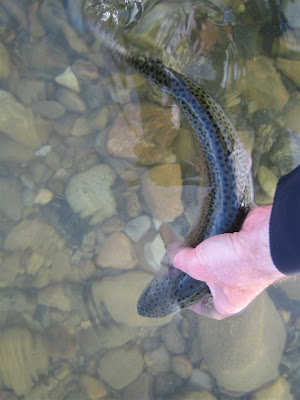 Posted by wyoflyfish at 10:39 PM No comments: