Morning On The River

The forecast was calling for heavy winds and rain or snow later on Sunday. I made a break for it and got in some morning canyon fly fishing. No one had been in the canyon since the last snowfall on Thursday. The trails were pristine crusted snow with nothing more than the occasional fox, coyote, or deer tracks. Crunching my way downstream I found the river to be running a little lower but the fish were still there in most of their normal holding patterns. The first little brown came on my third cast. The day was feeling great right from the start and I drank it all in. I keep thinking to myself how lucky I was to be out in the canyon with no bigger mandate than to fool a few fish and take an enjoyable hike. I managed a new species for the year as well, tricking a white sucker when I least expected it. He felt like a log or a snag at first and then started his rolling, bulldog run. Big brown is the first thought that runs through your mind, but then I got a glimpse and was just as happy to find a native fish enamored with my hot head leech.

I worked my way all the way down the canyon. The weather was much warmer than predicted, at least early in the day, and I had to shed a coat to cool down. While not paying attention to my footing, I took a hard fall on a shoreline boulder right to the left hip. I guess it was bound to happen at some point this year. A big bruise is certainly preferable to a broken bone.

The browns kept coming to hand in a timely manner and when the wind picked up I packed it up and headed for home. The snow started this evening. I guess tomorrow morning I'll find out if this was a "real" storm or not. Either way, I was fortunate to gamble on the morning and cheat the weather gods a little for a beautiful spring day in the canyon. 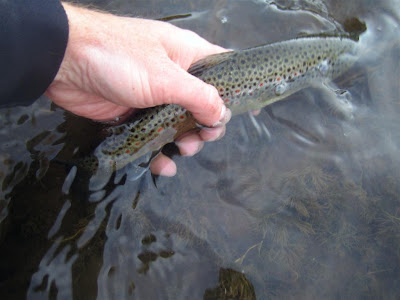 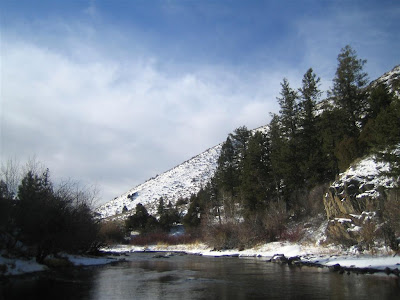 In the shadows of the canyon wall 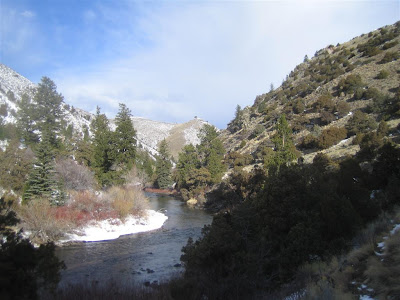 Native fish of the high plains 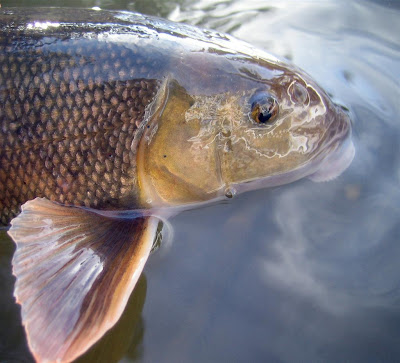 Hiking deeper in the canyon 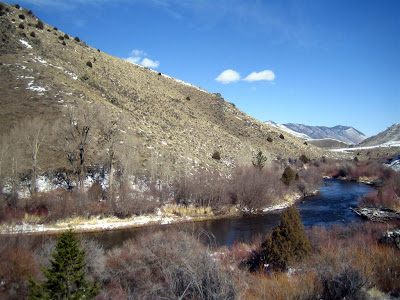 More pretty brown trout for me to endlessly marvel at 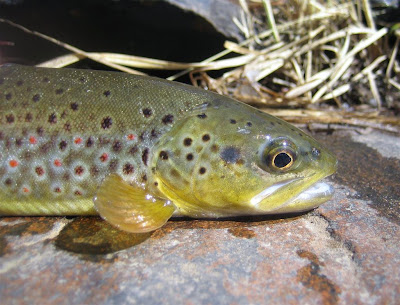 The last fish of the day was a good one... a video release.

I headed to the lake early today thinking I would beat the wind and arrived to a lake full of whitecaps. Two guys were putting on their drift boat when I started to set up the pontoon. They couldn't seem to make any headway against the wind even in a low profile Claka. I fared a little better and got to the spot I wanted and luckily had a solid anchor set that kept me stationary. I fished until early afternoon with five nice rainbows finding their way to the net. The day was quite beautiful if you could tolerate the wind. It's hard to believe we have a blizzard warning in effect for Monday!

Think I'll mix it up a little, here is a shot of the smallest fish of the day. 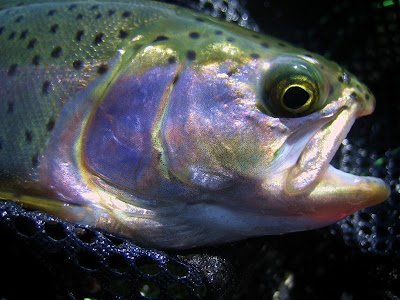 Sixty plus degree day of sun and low wind speeds... seems like a day begging for some stillwater pontooning. The action was on midges with this tooth filled rainbow trout topping the day as "best fish". I could have sworn the fish was trying to bite me while I was releasing it. Action slowed later in the day but I stayed plenty long enough and have the sunburn to prove it. Seems like I get taught the same lesson about high country sun about this time every year. 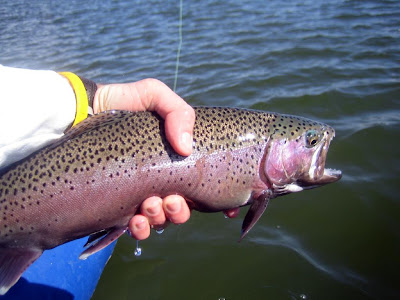 Shoe Heads North For A Visit

Shoe and I were able to meet up and get in a nice stillwater trip. The lake broke up enough that we could put on the toon and float tube but the wind was terrible. Floyd showed up for a short time but the wind was a bit much for him. He called it a day after too much time fighting the wind due to anchor failure. It was a bit of work to get out to where the fish were but it paid off handsomely. The ice was only about 30-40% off the lake and we fished the edges and weed lines extending out perpendicular from the ice. It proved to be very effective with midges really shining throughout the day. We both managed to break off a fish up high on the leader too at a hinge point near the indicator. After the fact I could see it was a bit nicked up and I cut it back and replaced with 0x to give it a bit more strength at the base. Shoe was on fire through the entire day taking fish after fish. I was set up a little shallower than he was working a weed line that was a little slower but I seemed to be getting larger fish. The best sized rainbow of the day was just shy of 20 inches. The prettiest fish was a leopard spotted 17 incher that had some beautiful spawning colors starting and those large dark spots all over his body. The camera battery had given up by then however. The wind was too much for the camera and the battery sapped out.

Shoe working the edge of the ice

Assorted fish from the day 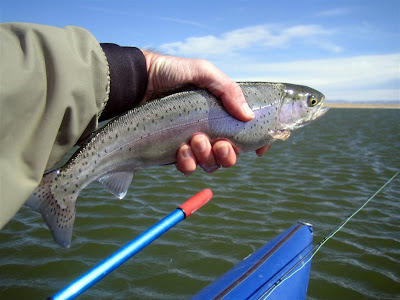 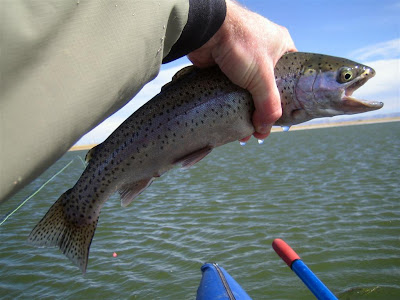 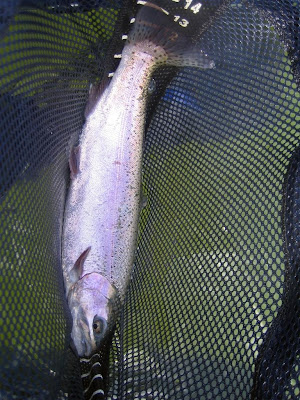 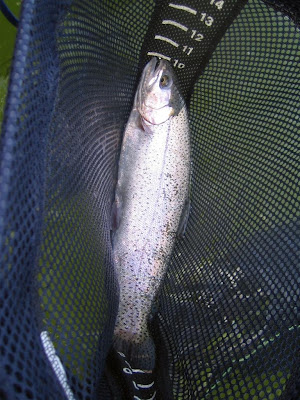 Ice Out Round Two

With the frigid temperatures this week we had another complete freeze on most of the area lakes. On Saturday the plains lakes were in the midst of icing out for the second time this March. I had ventured out intending to launch the pontoon but found too much edge ice that was too thick to break through and not safe enough to try to slide the toon across. I decided to fish the small amount of water that was open on the opposite side from the boat ramp. After a couple hours and only a break off and two takes to show for it, I called it quits for the day and just sat enjoying a beer and some conversation with Lynn, another fly fisher that had just arrived. I hope the fish turned on for him in the afternoon. I ended the day tying some more midges and hoping that Sunday would erode enough ice to float.

Big clear skies with no wind... too bad there was so much ice

Posted by wyoflyfish at 6:05 PM No comments:

The fly boxes are looking a little thin as spring rolls around. I should have been actively replenishing shortages during the winter. A little catch up this evening as the snow storm is beginning to blow in seems in order. Since stillwater is on my mind midges are the first patterns getting attention at the vice. 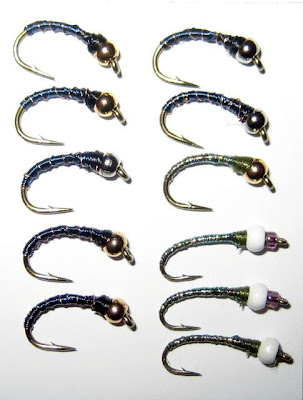 The start of spring fly fishing never really seems to be official until you can float that first trip out with the pontoon. It doesn't much matter to me if it is a river or a lake, I just get that crazy urge to get the boat out on the water. Although there appeared to be an ominous storm to the west, I managed to get out on one of the plains lakes to test the pontoon and shake of the winter rowing rust that forms after so many days away from the oars. The storm never hit but the temperatures were below freezing. Ice was forming in the guides all day but it all seemed to be worth it. After finding where I thought the fish would be holding on the outside edge of a surprisingly large early March weed line, the day lit up with non-stop action for rainbows. The best fish of the day went 19 inches with quite a few 17 and 18 inch'ers in the net as well. I had one that tail walked and put on quite a show. A few others were leapers, but most of the trout bulldogged hard for the weed line and really fought well for the early season just after ice off. The trout did rather well through the winter, as there wasn't a snaky fish among the entire lot. The chop was just right for nymphing with midges and the bite was hot. A great start to the pontoon season.

Fresh snow and I was the first one on the lake 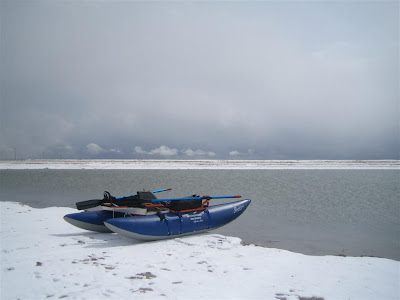 Some of the better rainbows on the day

I managed some time on Sunday to drive around scouting stillwater and the river to see what was happening. We have a couple lakes open and others in the stages of icing out so I pitched a few flies anywhere I found open water. No results on the fish side of things but the open water is promising for some pontoon trips in the very near future. Ice fishing season is definitely over and I saw no one crazy enough to venture out on any of the plains lakes I scouted. The river is still locked up pretty well in the upper stretches so that is going to be a little while longer before we see anything on the canyon and such. Down lower we are opened up pretty well and I spent a few minutes fishing the runs outside of town. Wind was a little much for the three weight but I managed. Should have taken the 5 or 6 weight out to compensate but it worked out well enough. 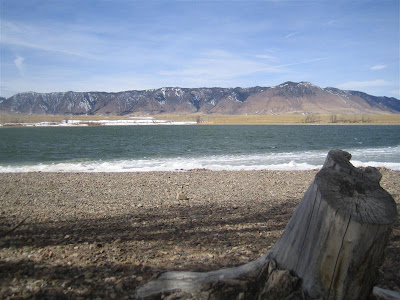 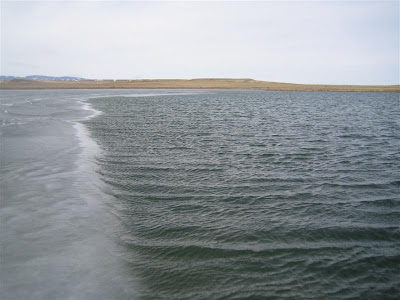 River is open down on the lower stretches 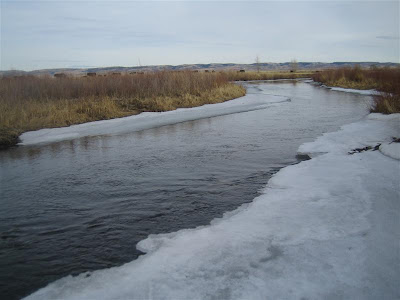