Three Weight On The Stream

I took the light rod out today to walk the stream.  Unfortunately we had wind gusts to 65 mph.  It wasn't too bad along the water with a little shelter from the banks and I was able to drop my casts in close to where I was aiming most of the time.  The fish were fairly active and swirling strikes or refusals occurred at almost every good pocket, hole, or undercut bank.  The leech was working well enough that I didn't switch flies but I thought about going to a hopper with the high winds.  I may have to try a hopper on another day very soon.

Rebirth Of A Lake

This morning was the TU Adopt A Trout program in cooperation with Wyoming Game & Fish.  We had 42 fifth graders out on a field trip to the stream to learn about stream ecology, fish telemetry studies, fish tagging, macro invertebrates, and fly casting.  I had a great time helping the kids on the fly casting station. [I'll get more info on the Adopt A Trout day up on the LVTU website soon.]

In the afternoon, I took off for a lake that winter killed this past winter.  I had heard a tip (thanks Derek) that the spring 7 inch stockers were running in the 16 inch range and that fall hunger was resulting in some good action.  The wind was blowing well, but I was able to get it at my back and cast the sinking line, covering a lot of water on each cast.  I was able to connect with quite a few of these rainbows and managed to land six in a short session of wading water deep enough to reach the top of the chest waders.  They were super hot fish, running, jumping, feisty and strong.  The sinking line was the ticket today.  I couldn't believe the bend these fish were putting in my six weight.  A great ending to a fun day with a focus on trout from start to finish.  The big question here is will we be able to get this lake through winter this year without another kill?  Spring of 2013 will hold the ultimate answer on that front.

I did a quick evening trip to a lake I hadn't been to since June.  Only had to share the lake with the wind and some geese. 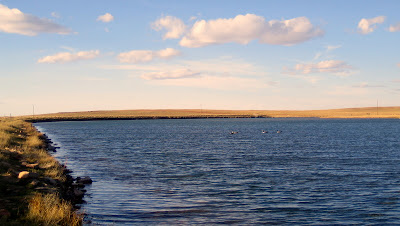 Landed a pair of these 12/13 inch stockers on the short 3 weight.  Really more of stream rod at 7.5 feet but I hadn't taken it out for a while and felt like swinging the light stick.  Stripping a leech got me a little action.  They felt great on the light rod and fought well. 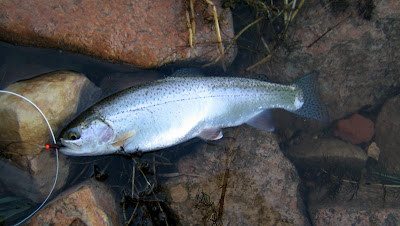 I ended up staying about an hour and a half and was rewarded with a beautiful fall sunset. 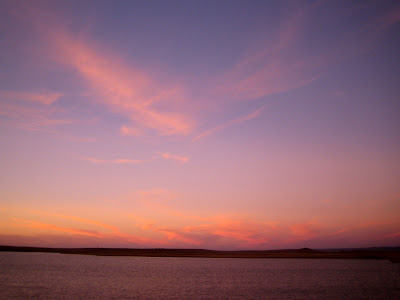 Posted by wyoflyfish at 9:37 PM No comments:

Evening On The Dam

I headed out this evening after things warmed up around here.  We had a bit of snow this morning and rain, then managed to get into the mid 50's around 3pm.  So I went out and threw the sinking line near the dam. The weather was decent on arrival and I was on the water about 4pm, a little wind but patchy skies and even sun now and then. 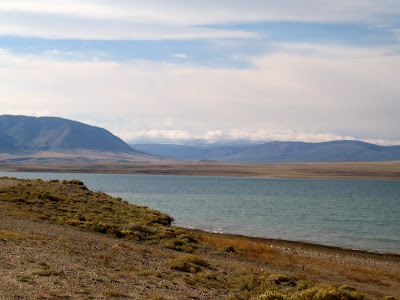 No apparent schools of any kokanee visible that I could see tonight.  I had a couple hits then a huge brown breached out of the water in casting distance.  Within a couple casts of seeing that brown, I ended up with a kokanee following my bugger and leech combo and take the leech within rod tip length right in front of me.  Never did find that brown, it was the only leaper I saw too. 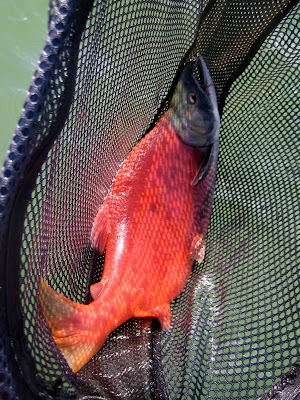 After this, the winds came up strong and I was surf fishing.  These were much higher waves than yesterday. I had to cinch down my wader top drawstring as they were crashing up above the edge of my breathables.  Sometimes I would jump as the roller came in to stay above it.  It worked and I stayed relatively dry.

The storm was approaching as I worked back across the dam. If it hit quickly I could make it to the vehicle fast enough to avoid the drenching that Shoe and I took on Friday.

Finally I struck a trout, a nice hen rainbow that fought well and finally came to the net. 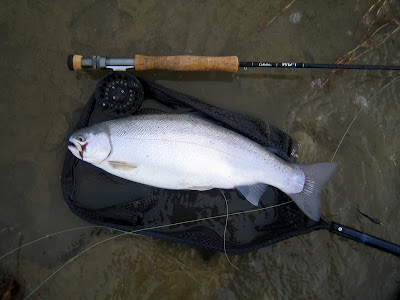 Once the drizzle started I was up the hill in a flash and headed for home.  Here's the approaching storm that proceeded to wet down the Pokes as they lost by 1 point to AFA. 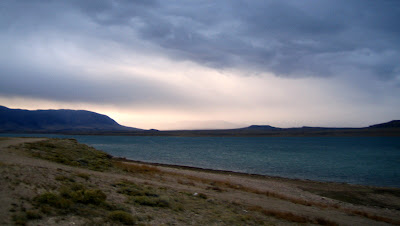 Posted by wyoflyfish at 9:25 PM No comments:

We hit the road early and got some good water time in on Friday.  Shoe did well throughout the day hitting some nice browns and had a 3 species day.  I had it rough most of the day with only the one nice snake river cutt landed and had several other fish on but just couldn't seal the deal.  It was fun to get out and fish with the Shoe though. I hadn't seen him since spring and we had as good a time as we always do.

Here are some shots from the day: 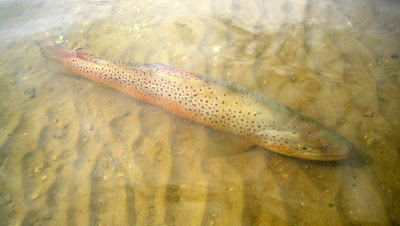 At the end of the day, we finally got a "little" chop.  Shoe working the white caps.  This was a little before the rains started.  It was already raining in every direction around us.  We called it a day once we both were drenched. 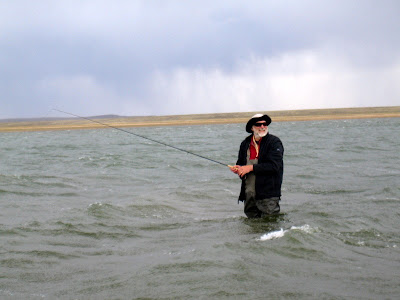 Posted by wyoflyfish at 10:59 PM No comments: