I took a trip to meet up with Mark for some sinking line tactics aimed at big trout. Frank C. was up there too and it was nice to finally meet him and Mark's friend Patrick as well. I didn't get any big ones but a couple decent trout were found and I managed to break off something rather large that I never got a chance to see. Mark and I had a nice time working from the toon and float tube. He did well later on callibaetis patterns under the indicator as we moved around trying to find fish. We did have a nice double of a rainbow for me and a nice snake river cutthroat for Mark. A great day to be out with good company.

Mark with a nice rainbow running 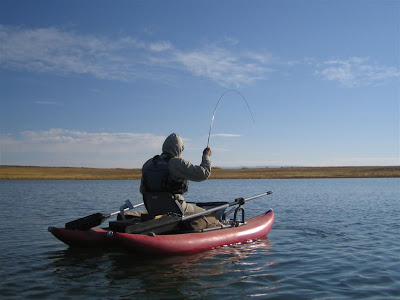 Results of the battle 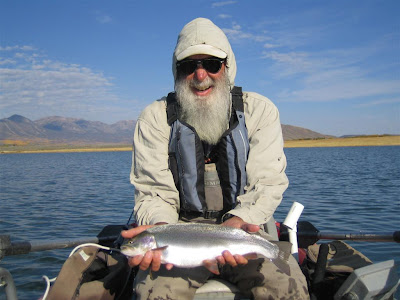 Frank gets into a nice trout 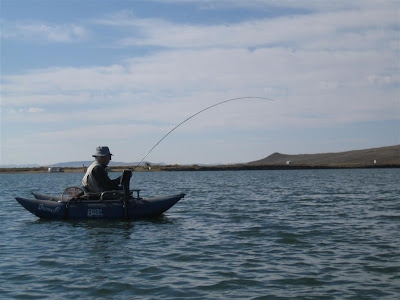 Brown on the streamer 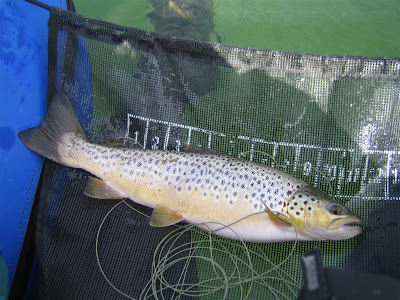 Fall colors on the hills 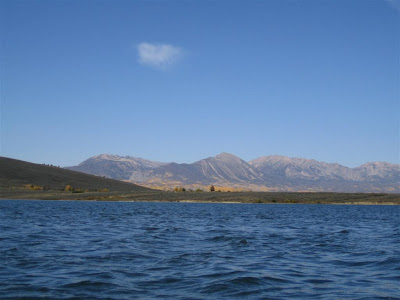 Mark with his favorite sucker 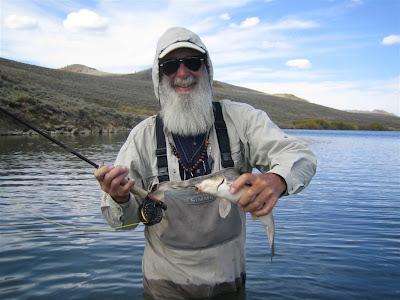 Another of many rainbows 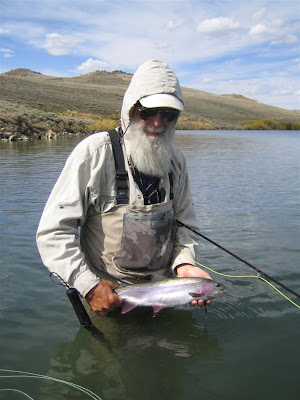 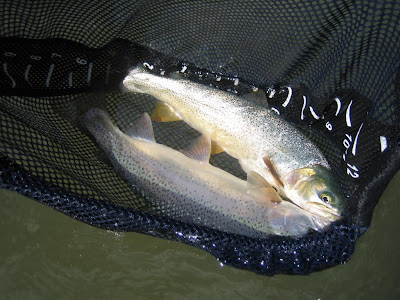 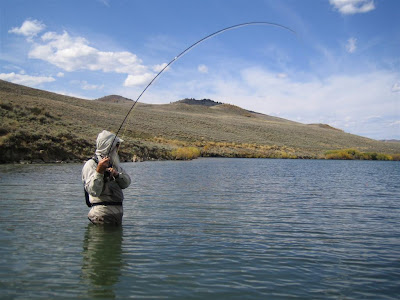 Posted by wyoflyfish at 10:03 PM No comments:

Hit a local plains lake with the hope that I would have the wind at my back to work off the dam. Unfortunately it was a nice crosswind coming down the dam wrecking my drifts and casts. No matter as I was able to find a few strikes and watch the horses play on the state land bordering the lake. 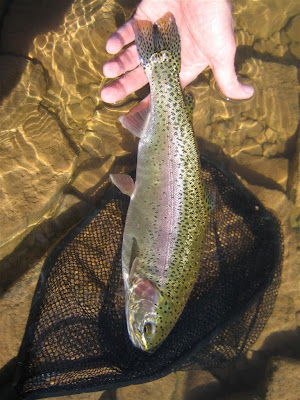 Posted by wyoflyfish at 5:40 PM No comments:

Saturday was a nice albeit wind shortened trip with Shoe, Willi, Fuzzback, and Eric. We got into some hot rainbow trout working us over on callibaetis, midges, leeches and pheasant tails. The worst part was having a strong west wind come up and run us off with whitecaps about midday. At least we got a little water time in and it was great to chat with everyone back at the parking lot and have a nice lunch before we all went our separate ways. I heard later from Eric he was able to get into some ducks on the first day of the season as well. I kept my last trout of the day for dinner with a marinade of lemon and peppercorn. It was an outstanding end to a beautiful fall day.

Shoe on the water 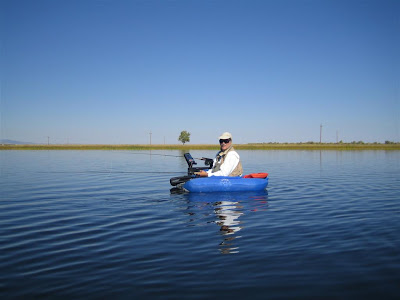 Rainbow early in the day 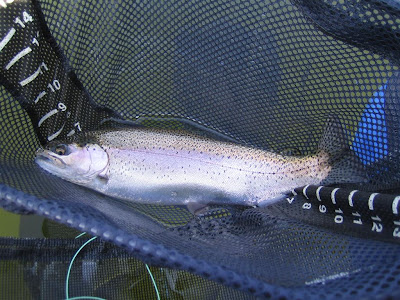 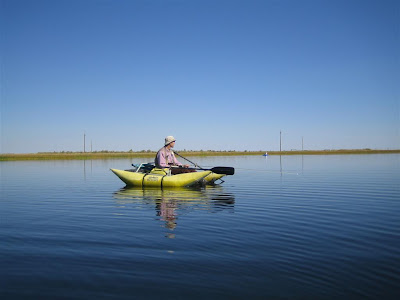 Eric hooked into a nice trout 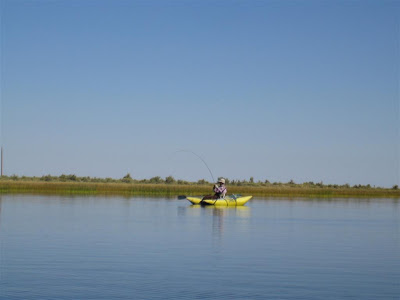 Another rainbow before the winds 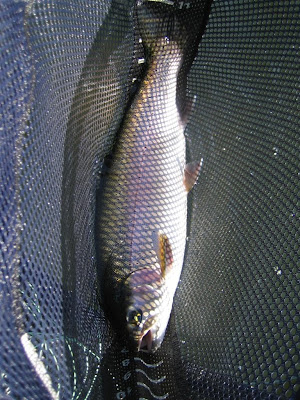 Shoe with a rainbow 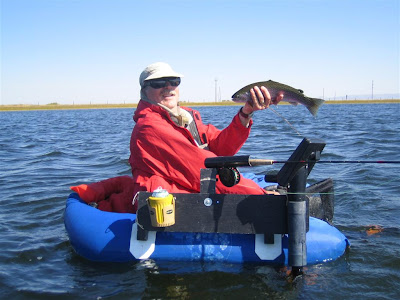 The mountains called today and I had to head up and check things out. The fishing was nice with brookies coloring up for the fall and the trees changing colors as well. The aspens are beautiful coating the hills with hues of golden yellow. I took a four wheel drive trail for a little while to what I would assume is an old ruined lodge or one very large cabin. After stopping and exploring for a while and collecting some ancient garbage to clean up a little bit around the area, I headed to an outcropping I wanted a closer look at and climbed it. I took my rock hammer along and although the outcropping age was right for invertebrate fossils, it did not contain any of the layers I was hoping for. I did however stumble a little too close to a predator hangout. Parts of a rabbit were hanging in a tree from what I can only assume was a bobcat or mountain lion frequented tree limb. I decided to head back down the steep slope when I noticed the prey remains. On the way back into town a stop at the Overland Trail seemed like a worthwhile break. You can still see the faint trail in the prairie grass.

Back For More Rainbows

I couldn't stay away from the lake for long and had to go back and tangle with some more of the strong rainbows from Tuesday. Today they were working me over and using the weeds to their advantage to throw the hook or break me off. I lost more flies today breaking off fish than I can remember ever happening in a single day in the past. I did manage to land quite a few as well that were just as powerful and strong as earlier in the week. A few cutthroats showed up today as well and it was nice to see them in there still from earlier this spring when they were small stockers. A couple of them have put on some decent size over the summer.

Various fish from the day

Posted by wyoflyfish at 9:18 PM No comments:

The common theme this week has been rain showers. The rain is not all that bothersome, its the lightning that tends to run me off the water to await their passing. Today was no different with a pair of severe storms passing through the vicinity of the lake. I got the pontoon out and had a blast fishing to stout rainbow trout up to 19 inches. These fish just seem to develop so nicely in this lake given the immense food base available. It was another day of midging and the acrobatic rainbows were quite a treat to battle. They are big on leaping and tailwalking in this particular body of water. Eric showed up later in the day to partake of some of the action as well and we had a good time watching each other get bulldogged and schooled by the powerful 'bows.

Headed out to a nearby brown trout fishery. When September arrives the lake really begins turning on and it seems to get better and better the later we get into the year. I met up with Adam and Christine in their drift boat which also served as a floating microbrew bar. I was float tubing for the day. The crowds were surprisingly low, so much so that I was the only person on the lake when I arrived mid morning. We proceeded to get into many browns with a few snake river cutthroats also in the mix. The fish were on midges and we were able to keep feeding them a steady diet of matching flies. Only one storm ran us off in the early afternoon after which we returned to a few more fish before the final storm squall coming over the mountains ended the day. A satisfying way to spend the holiday and a nice start to the week.

Update: A few shots from Adam in the drift boat 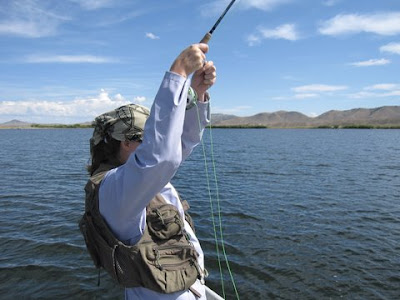 Me in the float tube 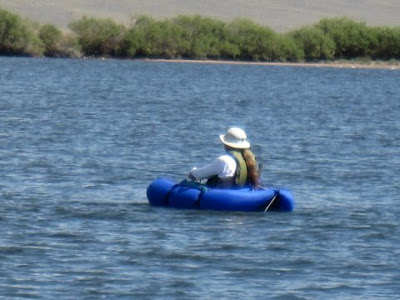 Christine with a brown trout 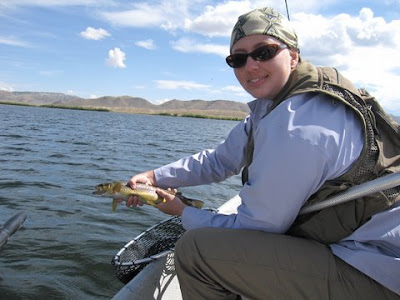 Adam and a nice cutthroat 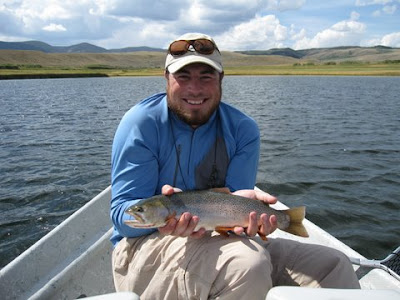 Posted by wyoflyfish at 11:44 PM No comments: 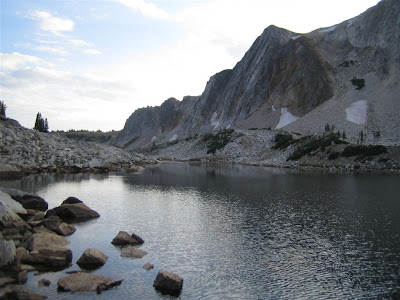 My original plan for the day was to pontoon some stillwater here in the valley. It was sweltering and even with the promise of large rainbows, I could not bring myself to go out and sit under the sun on the water. It was too hot so I figured the cool of the high country was in order. As I was driving into the mountains to search for trout, a lake popped into my head that I hadn't fished yet this year. It's an easy hike in and does not require waders. This sounded good to me as I really didn't feel like getting all geared up in waders and boots. After leaving the steamy lowlands, the thought of donning all those layers was not appealing. When I arrived at the lake there was not another soul around. I had the three weight set up with the rainy hopper and a trailing royal wulff. The brook trout couldn't leave either of the flies alone. During the time I had on the tandem the hopper seemed a little more preferred. Eventually I broke off on a fish at the hopper and went to a single royal wulff which kept producing well. The fish are beautiful little gems but this lake is overrun with brookies and they could actually use some harvest here. When Dad is out this fall I think we will keep a few of these for a shore lunch or dinner. I headed home as an orange tinted full moon rose through the haze created by the California wild fires.

These brookies are each beautiful hues of color 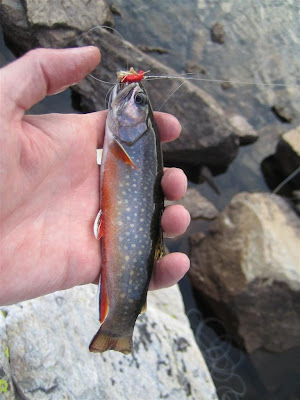 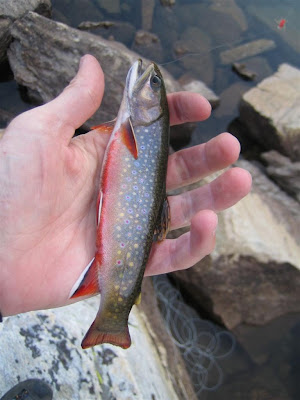 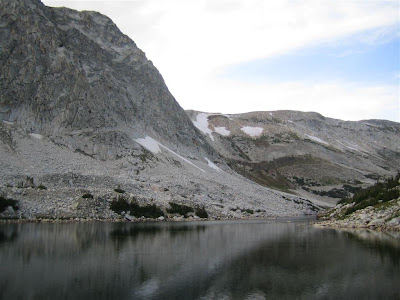