Zero On The Lakes

My dry streak couldn't continue another day could it? Sure enough, I took a couple hours to go hit the plains again today and just had no luck with the trout. I know they were there as I saw a couple landed, but alas not interested in my flies. I didn't even bother with the camera today as the rain was constant. I just left it in the case.
Posted by wyoflyfish at 11:20 PM 1 comment:

Things just can't seem to get going yet on the valley lakes with the roller coaster weather we have had coming though the area. Yesterday we had 65 mph winds which shut down any chance of a Friday fishing trip. Now the cold and wet has rolled back in with some lesser wind. So, off to the lake to give it a shot and see if the fish are interested in any offerings. No takers today.... perhaps tomorrow things will improve. 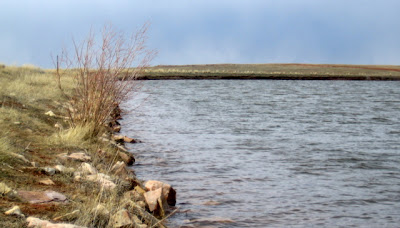 We had our local TU chapter river cleanup on the Laramie River today to coincide with the city wide cleanup that happens every year in April. I donned some waders and pulled quite a bit of junk from the river. It was definitely in better shape than last year so it seems we may be making progress. More info on the cleanup at: LaramieTU.org

I was hoping to get into some trout in the afternoon and headed out the plains to try some lakes having a few hours available to throw flies. The weather turned and I was glad to have the rain jacket on as wind and waves of drizzle were coming out of the mountains. Nothing to report fish wise tonight.

Storm coming in over the lake 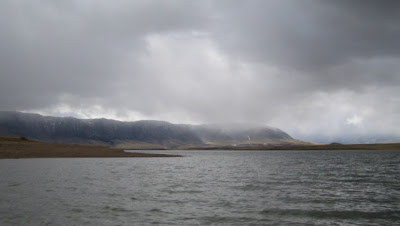 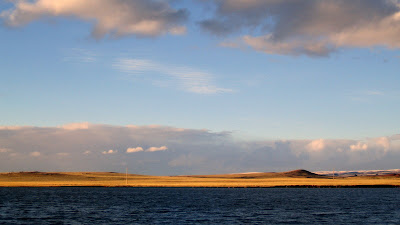 I hit the lake for a little while at dusk tonight. There was nothing going on for me but I did drift a few nymphs and watch birds. The red winged blackbirds were starting to work the lake edges and a huge variety of ducks were coming in to land in the last rays of light. I fished into the early darkness and then took off for home and a late dinner.
Posted by wyoflyfish at 11:44 PM 2 comments:

We had some family appointments and errands in Cheyenne today. I wasn't required to attend any of them so the waders and rod went into the car for the trip over and I spent a couple hours fishing at a local city stillwater. I got into the stocker rainbows pretty well but couldn't conjure up any of the warmwater fish that roam the lake. The water was still fairly cold and they may not have been moving much yet. I got all the action on the nymph setup under an indicator. Hot head leech was the favorite and the midge patterns were being targeted too. 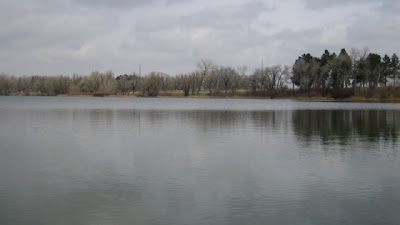 Typical stocker from the hatchery 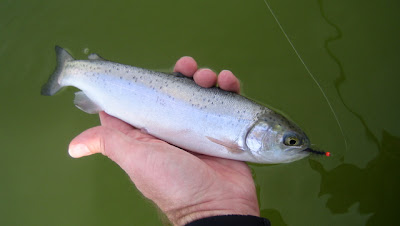 Slow night on the water this evening. I got out right before sunset and fished into the dark at a couple of the plains lakes. There wasn't any interest in stripped buggers tonight. Maybe a little too cold still for them, I don't know. I was coated in scuds when I got out of the water. I didn't know it in the dark but figured it out after I got home. The vehicle is filled with their orange remains now.

Shot before the sun was completely gone for the evening 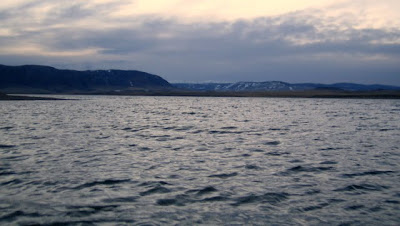 Knowing that a big storm was coming our way on Sunday, I took a last ditch afternoon trip to the plains lakes outside of town in the hopes of a little action on the fly. I knew the winds were bad, gusting to 65 mph. I just had to try as everything other than the wind was cooperating. It was in the mid 60's for temperature. I got to the lake and a few others were out including Nick and his friend Sarah. Nick said he was able to get one trout as they were on their way out. I continued to work the water as best as possible with the wind at my back and sitting down which kept me sheltered from the pounding gusts. I wasn't able to find any fish, and when the mud finally worked the entire dam to a frothy brown, I departed. 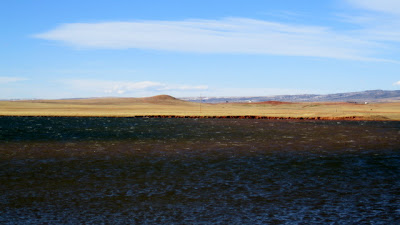 Posted by wyoflyfish at 11:40 PM No comments:

Ice out is slowly headed to the higher elevations and the fish are ready to take advantage of the open water. I hit a lake that is right about at 8000 feet and it was just starting to reveal its treasured open water. The edges were all open with ice shelf conditions on some sides. I watched an immature bald eagle fishing the edges of the open water. The eagle was onto something. The ice edges proved to be the hottest fishing with trout using it like an undercut bank. Fishing a stripped bugger along the shelf often provided a crushing strike or swirling follow. I was able to entice fish to strike right at my feet with the figure eight swing of the bugger before recasting. A couple fish were taken on the nymphing setup but bugger fishing proved to be the most fruitful on the day. It was one of those stellar early season days that you look forward to at the start of spring. Wildlife everywhere and active hungry fish destroying streamers.

I started the day checking on the river... not quite ready for prime time yet but very close. Perhaps this coming weekend it will be open entirely. 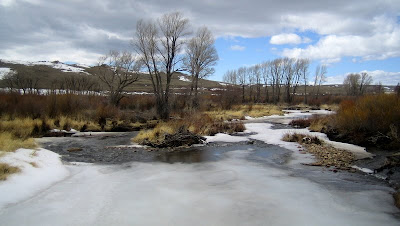 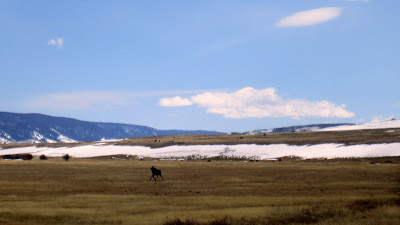 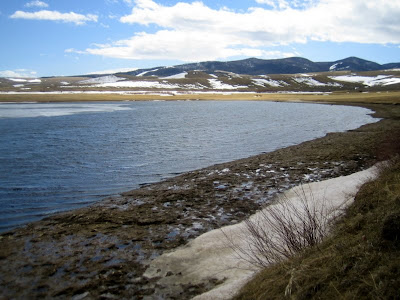 Second cast and I was into a brown, a good omen for the day 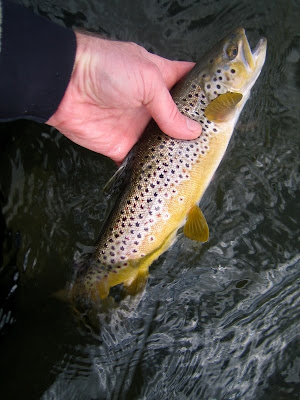 My first Snake River Finespotted Cutthroat of the year 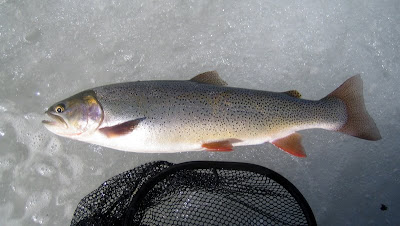 A pretty brown trout that hammered the bugger 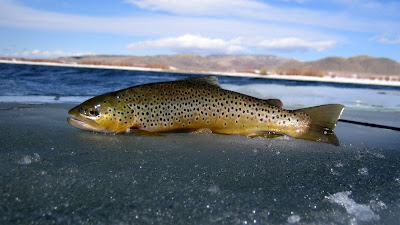 The best fish of the day - a 20+ inch Snake River that pounded the fly right at my feet. It was a startling take and a bit of a fight to keep him from cutting me off on the ice edge. 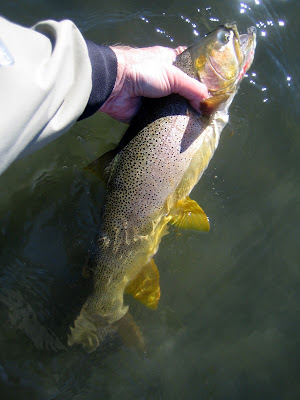 At the end of the day, I waded out on a large sand flat and got into some browns that must have been in hunting crayfish on the flats 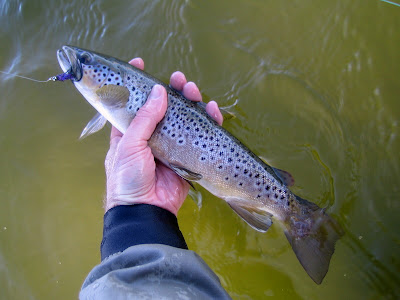