After cleaning the brook trout on Saturday we discovered they were full of olive chironomids. It was determined this morning that we should head back and do some indicator fishing to see how well the midge patterns would perform. It was nice to strip buggers on Saturday but the change of pace sounded good Sunday and we were testing our new information. Eric, Floyd, and I all met up at the lake and proceeded to take some nice fish on the midge imitations. I managed the three species trifecta on my first three fish with a brown, brook, and rainbow trout all in succession. That was pretty amusing and I kept looking for the elusive cutthroats that people claim are in there, but couldn't find one. The fishing was better than Saturday and as the midges waned after another heavy storm, I went top water for a couple rainbows and then finally to a hot head leech working tight to the banks for a nice brown on the stripped leech. I took the three weight today, and it really paid off in enjoyable fish fighting. It is definitely the right fit for these higher elevation trout. 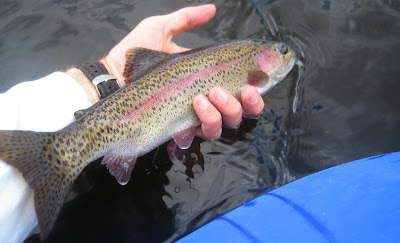 Eric after the storm

Floyd out in the new Fishcat 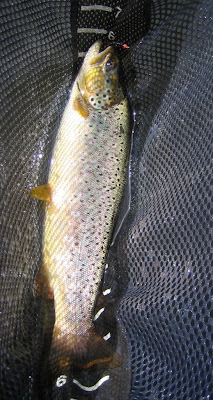 Posted by wyoflyfish at 9:43 PM No comments:

Things are opening up higher in elevation now, so Eric and I took advantage and hit a higher mountain lake that sits just below 9,000 feet. We got hammered with a hail and rain storm early on but it only lasted for 15 to 20 minutes. We did have a little intermittent rain later in the day as well. Action was a little on the slow side but consistent and we managed some nice rainbows up to 17 inches and brook trout in the 12 to 14 inch range working sinking lines with buggers. The fish were hammering the bugger on the pause of the strip. I kept a few brookies for dinner and oven baked them. They were delicious. 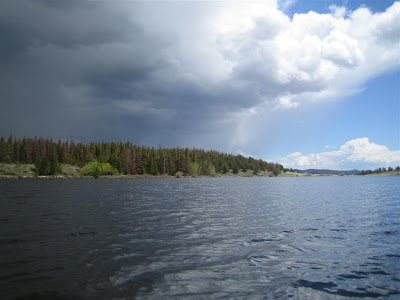 Nicer rainbow trout on the bugger 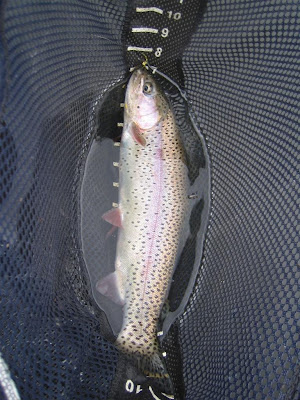 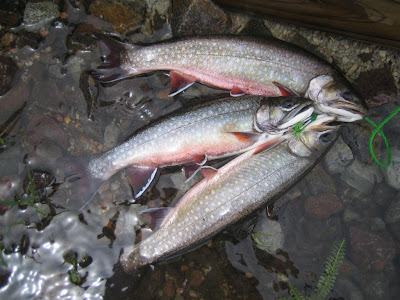 Posted by wyoflyfish at 9:19 PM No comments:

I took an exploratory trip with the three weight into the mountains to find out if any high country trout were accessible and willing to take flies. There was a huge storm cell about two miles outside town but I could see better looking light and calmer skies behind the cell and up in the mountains. The six feet or so of snowpack was solid enough to walk across with just boots so I made my way to the lake. Things were pretty locked up but I managed to cast to a few slow moving lake bound fish working a small 20 to 30 foot opening. They were taking tiny midges up top every so often but I couldn't coax them into taking any of my offerings. I decided to give the creek headwaters a shot as well since it was close and easy hiking over the thick snow. It was filled with tiny brook trout in the 2-4 inch range moving around in gigantic schools but they were not large enough to take my flies. I moved down in elevation to explore and scout the river and also try a little lake that is very shallow but was low enough to be open at a little over 9000 feet. The river was absolutely hauling with runoff. It was fun to watch but not worth trying to fish. I searched for some accessible slow seams or pockets but they just were not available. I didn't see any fish activity at the lake but I tried it for a little while in the rain before leaving. Hiking the circuit around the little lake, I cleaned up a few cans and some trash from the previous season and decided to head back into town. On the way to the valley a bright set of rainbows became visible so I took a quick shot of one from the jeep. It was a satisfying early trip up into the mountains. It won't be too much longer until the backcountry opens up and the high country season is here.

Just a small opening but fish were working it already. The cloud ceiling was low hiding the mountain tops. 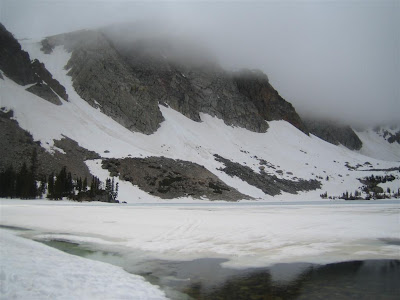 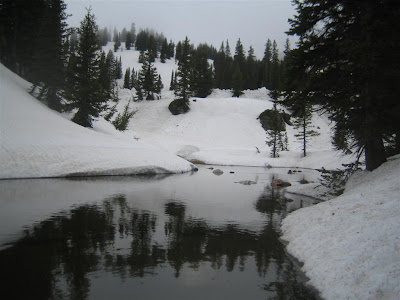 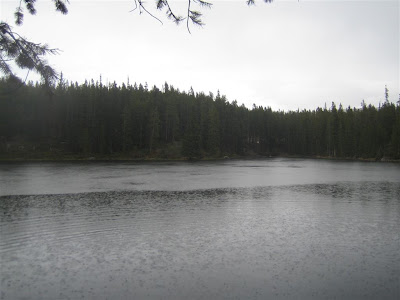 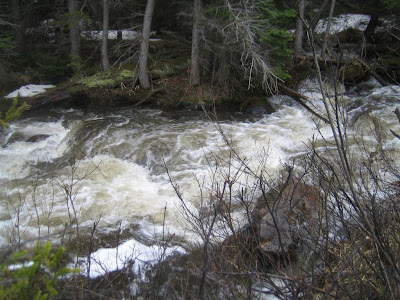 Rainbow over the town of Centennial 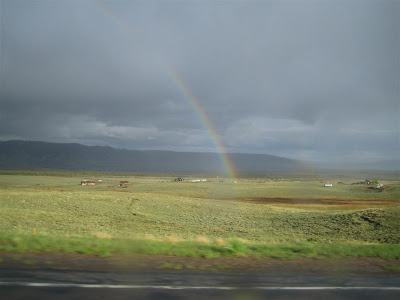 My friend Braiden may have caught the fishing bug in a big way this weekend. He is on vacation with his parents in Mexico and landed this 100 pound marlin on an evening sunset sailing cruise out of Akumal. He just started fishing off the boat and about half an hour or so into the trip Saturday evening he hooks into something big. Forty five minutes of fighting the beast resulted in a picture perfect leaping battle and finally this beautiful fish. Congratulations Braiden, that is one heck of a vacation memory to always treasure.

Braiden in the chair 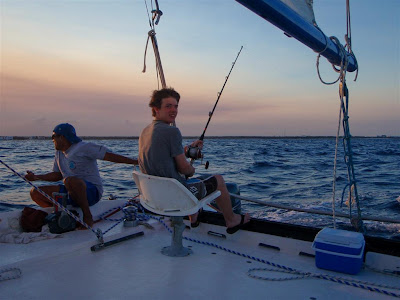 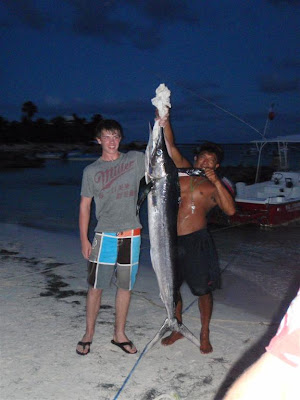 Photo generously provided by crossbarphoto.com
Posted by wyoflyfish at 10:21 PM No comments:

I went out south of town to try a little top water action. Of course, any time I try to get out in the evening a storm seems to fall right in line with my destination lake. Tonight was a smattering of rain but not bad enough to need more than a fleece. I fished top water hoping to entice some rising evening trout. I had one take that didn't result in a hookup. Saw a few other rise rings but not much going on surface wise tonight. Stripped a hot head leech for a little while but they didn't seem interested in the offering. The three weight felt good throwing a nice line tonight, and I'm glad I got out after a long day at work.

Storm as it heads over the Laramie Range

Posted by wyoflyfish at 9:09 PM No comments:

Headed out to a nearby lake that has some nice rainbow trout in it. I thought I would take out my recently patched breathables for a test run. It turned out to be a big mistake. The overconfidence I had in my patch job was soon abandoned as I spent the afternoon fighting to ignore the dreaded Cold Wet Crotch Syndrome (CWCS). I probably could have put it out of my mind if the fishing had been decent but it was painfully slow today. I had a few takes and one hookup and that was it. If I could have toughed it out until dusk I think things would have improved, but it was too cold and wet with these leaky breathables to stick around. I'll try some evenings out there after work soon.

Tubing down a weed line 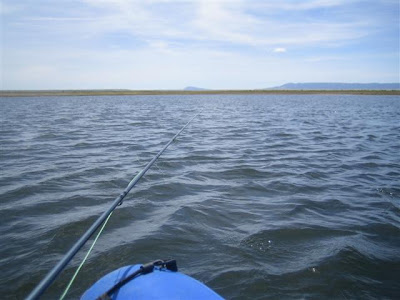 Met up with Eric and we got into some trout on midge patterns. It was rather uneventful for fish of any size for me. I could not seem to get through the numerous smaller trout the the big guys. Nevertheless, it was a nice day of catching feisty cutts and browns with the resident bald eagle stirring up the ducks and geese every so often. Eric did manage some nicer fish and he finally got his pontoon fully operational. The weather was incredibly nice and I stayed into the evening a little while trying for some browns on streamers but it just didn't materialize before I decided I needed dinner and headed for town. 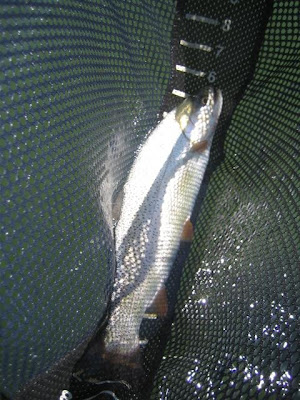 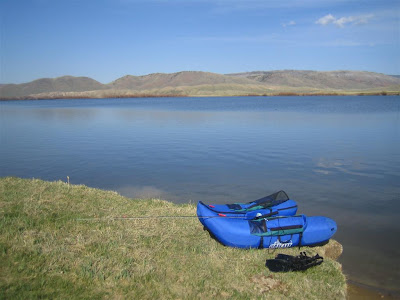 Posted by wyoflyfish at 10:14 PM No comments:

Friday night I talked to Mark about the conditions down where he was set up in his camper. He said things were still not turned on yet. This was disappointing but I decided to go with a contingency plan at a back up lake. Stillwater midging for the day produced a ton of fish. The lake was full of trout and they all seemed to know what was on the menu. Eric and I met up and had a great time tempting the brown and cutthroat trout with our standard midge patterns. Eric started off in his pontoon but when it started sinking he decided his patch work wasn't holding on his troubled air bladder and fished the day from shore. I was surprised how busy it was at the lake. There were many people out throwing and trolling buggers, but I didn't see a lot of them having any success with that approach. I float tubed the entire day and got a nice leg work out. The wind never got terrible though and kept a nice chop making midging easy. Best fish of the day was a 19 inch brown. There were many beauties but I didn't do much camera work as it is tough in the float tube.

A nice brown with some pretty colors 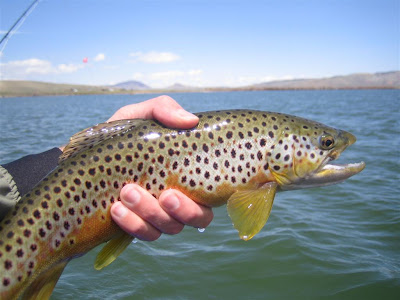 Conditions for midging were perfect 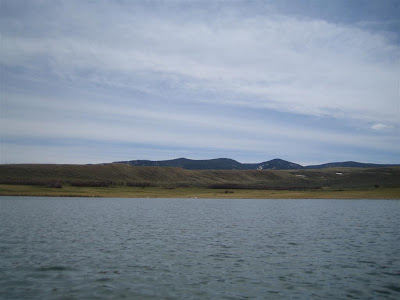 I took a nice walk on the greenbelt but just went to scout the river due to the wind. I found some nice looking holes on a section I haven't tried yet. The water wasn't too high yet through town but was off color and definitely moving at a decent clip. I had a big brown beaver encounter. He has a nice lodge on the river and did some tail slapping due to my presence. Later on, as I was walking back he was feeding on sandbar greens. The territorial prison was lit well with the sun beginning to set so I took a quick shot of it as well. 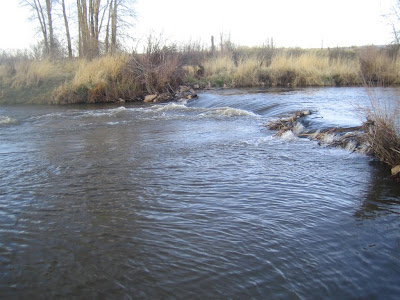 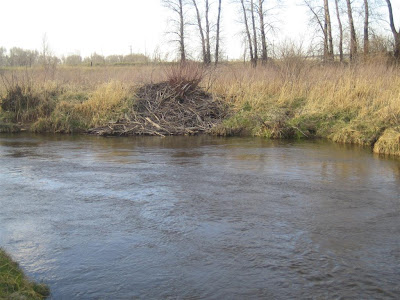 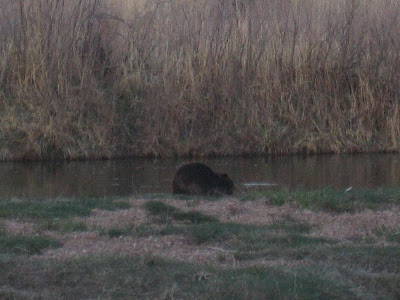 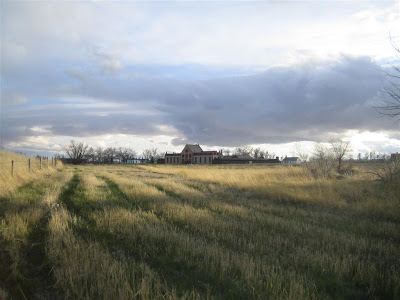 Rainy Day In The Tube

Shoe and I found time to hit a nice stillwater we frequent throughout the year for the first time this season. It produces some excellent and very reliable midge fishing. The quality and quantity of fish can be a bit overwhelming at times. It really can be on fire with the hatches and today was no exception. We were getting takes constantly and fighting mostly brown trout all day long. We had tons of ghost hits, but when you did hook up it was typically a nice brown in the 16 to 18 inch range. The fish were beautiful and feisty and we had a ball battling them and watching their acrobatic displays. Throw in a couple cutthroats to balance things out and we enjoyed ourselves immensely. The bad part came when the afternoon rains arrived and never let up. We continued to fish in the rain not thinking about the condition of the road. On the way out it was as if we were driving on a sheet of ice. The top 3 or 4 inches of the road were skating mud. I was glad to have the jeep today as we got out with a nice slow pace without any major problems. 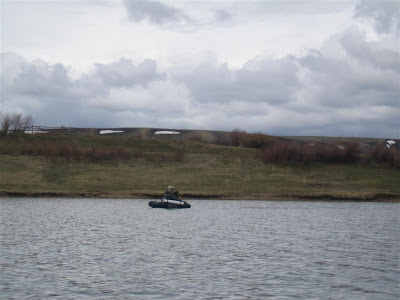 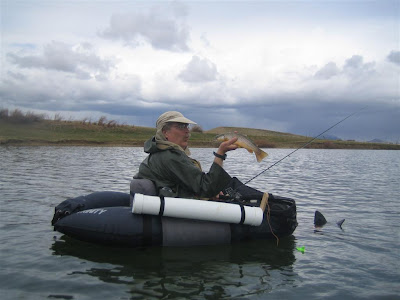 First SRF cutthroat of the year 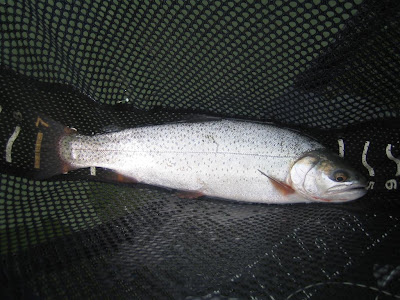 The incoming storm that pounded us 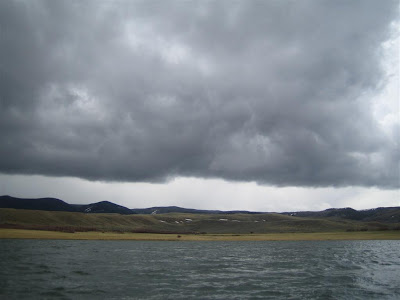 A duck tried to bomb me but was just off target 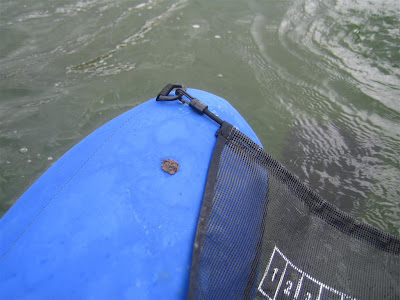 Some of the various browns of the day