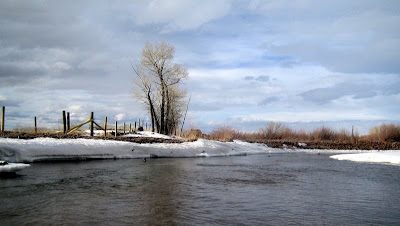 The warm snap has really opened up the local river and I threw on the waders to get out and explore the structure and see if any fish might be tempted into biting. I was out for about two hours working my way upstream. I saw signs in the snow and ice that others had been along this section too. Hopefully they found some trout. I was unable to move anything today. With the impending arrival of a cold air mass in the valley I felt like it might be my last chance to fish for a while. I can't remember seeing this much open water in January before. It won't last but it certainly helped out with some of my cabin fever.
Posted by wyoflyfish at 11:11 PM No comments:

The Shoe ventured up to the high plains for a little ice fishing today. I was awaiting his arrival on the ice in the morning sunlight. It was a long, slow day of no action. We tried three different lakes and a few different tactics with no success. I had one hit and spotted one other interested fish all day. It was slow to say the least. Shoe had a tug at one point too, but that was it. Speaking with other ice anglers at all three lakes, we did not talk to a person that had caught a single fish. Perhaps the warm temperatures or some other climate condition had the fish in lock jaw mode. Whatever the case, Shoe and I had a fine time visiting on the ice and catching up. We stayed on the ice until sunset, content that we had given it a full effort but today was simply not meant to be one of catching, only fishing. 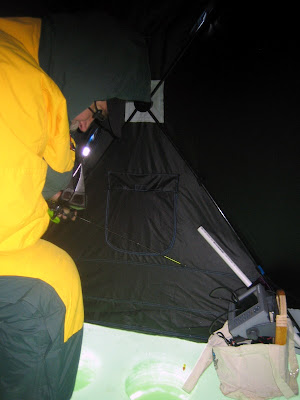 Moving around to try to find fish 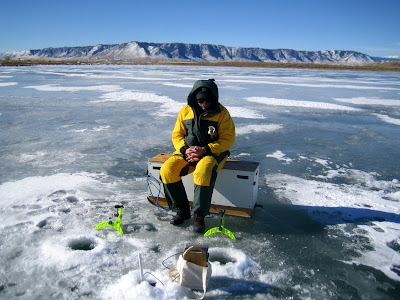 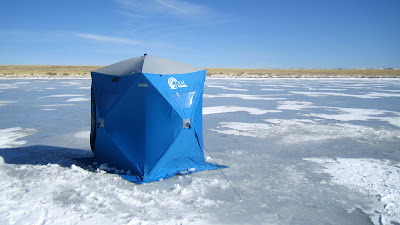 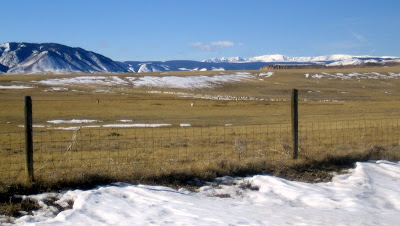 Sun setting on our ice efforts 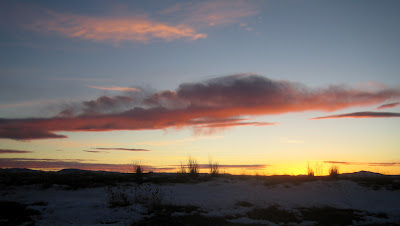 Posted by wyoflyfish at 10:47 PM No comments: 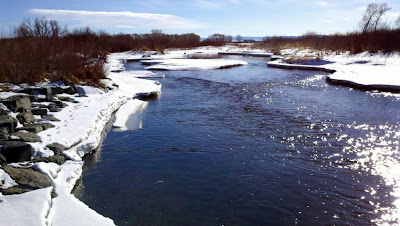 A nice walk with the fly rod today. The sun was shining and no wind to speak of made for quite a day of swinging flies. The morning started below freezing which kept the muddy runoff at bay until about mid-day. It was obvious when the temperature got above freezing with the noticeably cloudier water entering the system. I managed to get some nice brown trout action prior to the start of the daily flow increase and had a great day out, even catching a little sun on my face. A good way to spend a winter day in January. 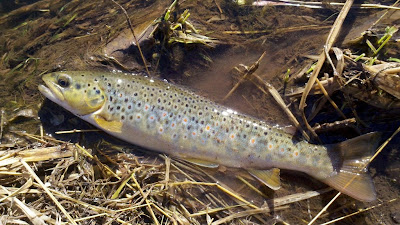 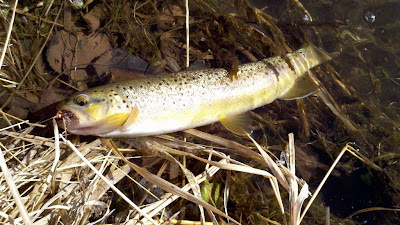 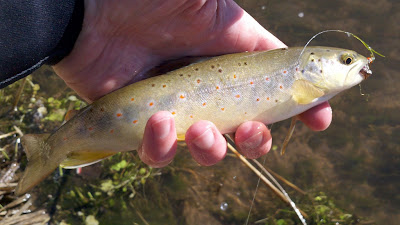 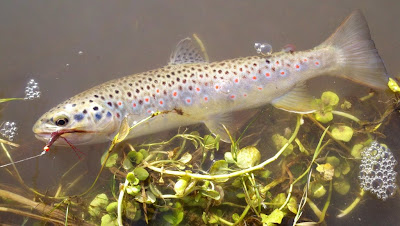 Sunrise On The Ice

I was able to sneak out early this morning trying to beat the wind and maybe find a few trout through the ice. I got set up in the morning darkness and was hopeful for a good bite on the day. I broke off one fish and then missed another four takes or so before a few hours in the wind became too unbearable and I headed for town. The trip was all worth it though to sit there and witness the sunrise with a hot cup of coffee in hand. It was quite a show and I was lucky to catch the start of the new day this January morning. 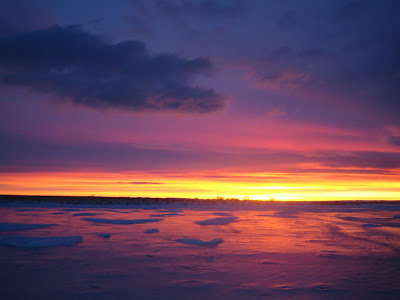 I went out and prospected for trout in the muddy flows that were set loose due to the 40 degree heat wave we are currently having here. It was slow going with the level of mud in the system and water up high, but I worked a hole where I could just feel a fish should be laying and then lightning erupted on the end of the line. The leech was good enough to entice my first brown trout of the year. 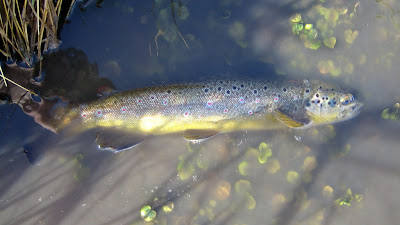 Before The Storm Hits

George and I talked Saturday evening and decided to try an early Sunday morning trip to beat the winter storm that was headed into the valley. We were on the ice before sunrise and the fish were active. We saw many fish come through the holes from the ice hut. Scuds were rising into the drilled holes so we decided to try some scud patterns and the fish were finally interested in our offerings. Trout were simply cruising about half way down the water column and lazily eating the swimming scuds.

Here is the first fish I was able to land after messing up a few takes and missing some others. 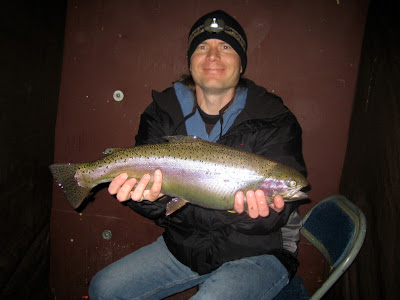 George also got in on the action and I captured a little video of the battle.


A quick shot and back to the water 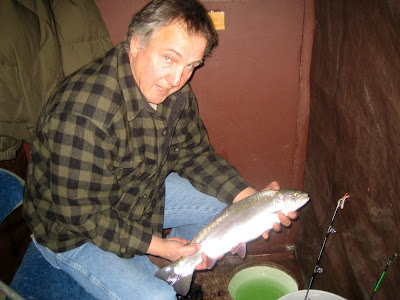 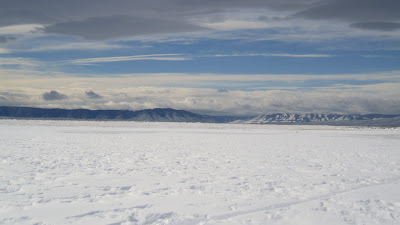 I have been wanting to get out and find some water time since the start of the new year but things just haven't lined up well with weather, work, and free time. Today I finally found a few hours in the afternoon to pursue trout on the hard water. The going was slow and first and I couldn't seem to find any fish or even see any down the hole. Water boatman were thick in the lake and were instantly filling the holes right after they were drilled. I have never seen these sorts of number of active boatman in the winter. It was quite astounding and left little question as to what the fish were most likely consuming.

I decided to try a couple pictures of the insect explosion. Macro setting ENGAGE! 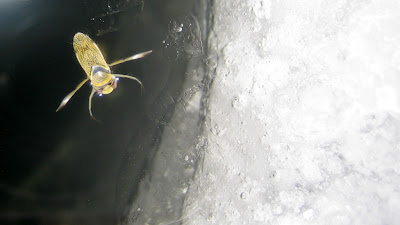 In talking to a few other fisherman, the slow action tended to be the general consensus for the day, very few fish even spotted and no one I spoke with had caught anything. I decided to mix it up and get into a much shallower end of the lake. I worked it for a little while with no interest from the fish, but suddenly after having added some heavy action to my jig I managed to land a nice rainbow to start the fishing season off right. 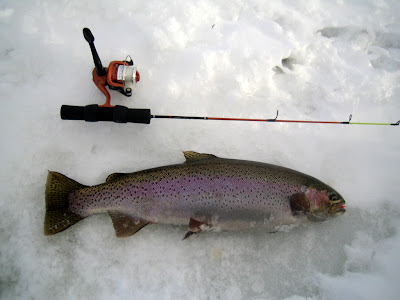