Adam and I had a wonderful day out on the river to end January. The wind hit us hard but we were able to muddle through and at least get it to our backs for most of the day. The warmth of the sun helped keep the wind chill to a minimum and we spent the day drifting various nymph rigs to the resident rainbow trout. We had a few micro brews with lunch and moved to various spots on the river throughout the day. It was exactly the type of relaxing winter fly fishing we both needed. 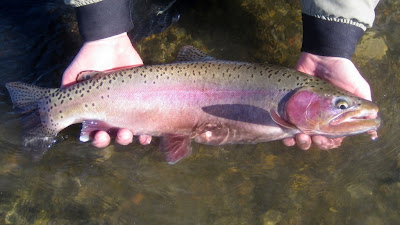 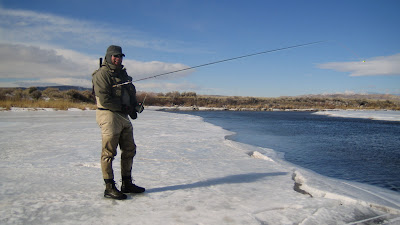 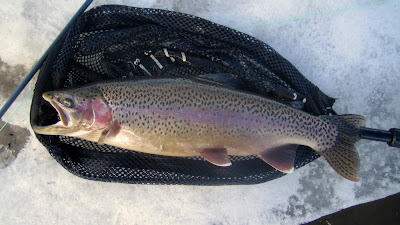 The cliffs at sunset 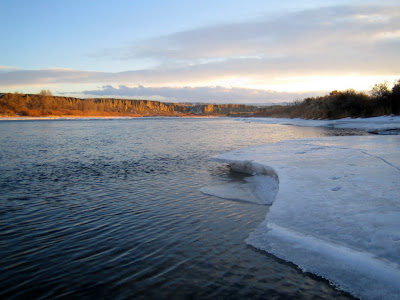 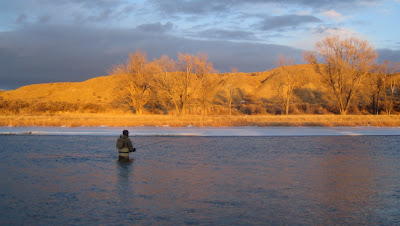 This fish wrapped up the evening as darkness approached 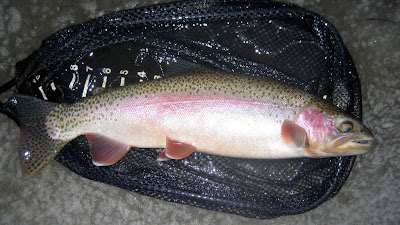 The small amount of open water has been treating me much better than the hard stuff this year. I went out with the fly rod and battled the iced guides and slowly rising winds. Fish seemed to be active and when I could stalk within long casting range, I could often elicit a visible follow or swirling strike on the bugger. I was able to manage a few small browns and ended the day on my first rainbow of the year. It was a pretty little trout with fading parr marks and a sparse spotting pattern.

A small flow through with ice build up 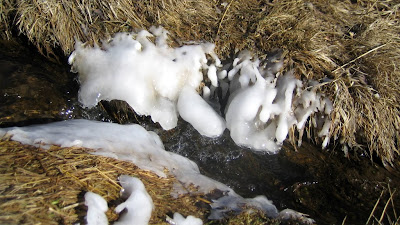 Some of the active browns from the day 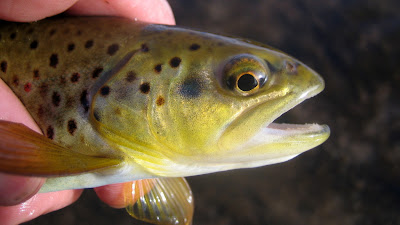 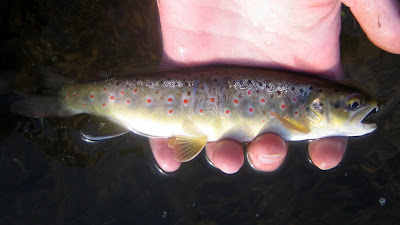 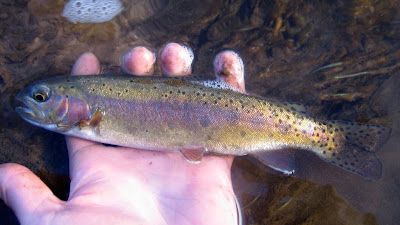 Slim Pickings On The Ice

I spent a few hours this afternoon on some plains lakes ice trying to fool a rainbow or brook trout into displaying any sort of activity. I couldn't find any willing takers today. It seemed no one else on the ice was having any luck either. I met a few nice people out there though and enjoyed a beer in the sunshine. I did have my license checked for the first time this year and the G&F warden was very nice and stopped to talk for a bit.

I did figure out that its time for a new camera battery. It can barely hold a charge in colder weather. 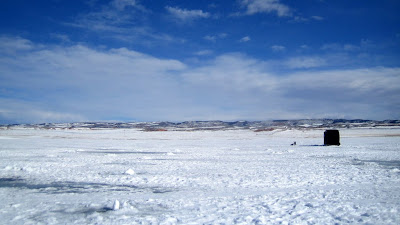 I managed some time on the water today. I even managed some time IN the water today after slipping and submerging the lower 12 inches of my right leg. It was worth it though as I hooked up with and lost a nice brown on an undercut bank. After that I proceeded to the heron hole which granted me a first cast strike resulting in the chunky brown trout pictured below. 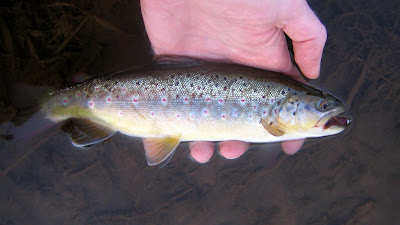 On The Prowl For Browns

After a nasty head cold prevented me from finding time on the water last weekend, I was itching to walk the water's edge and swing a fly rod in search of a fishy tug. I will typically wear my watch on my trips out as I have a schedule to meet or keep, but not today. Time was of no importance. I would be there as long as I felt like walking, casting, or just sitting and watching the dance of the water. The valley was absolutely gorgeous with highs in the 40's and not a trace of wind to upset the casting stroke. The warmth had the water a bit high and it was off color, but I was hoping the conditions would favor me given that low, clear water here generally gives the trout an advantage over the fisherman. On the third cast I had my answer, with a feisty little brown trout pounding the brown bugger and dancing on the water a bit before coming in for a quick picture and speedy release. 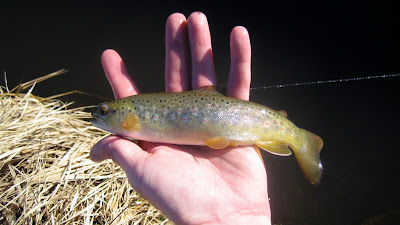 After, the first fish of 2010, I worked upstream targeting nice lies and didn't find any fish for a little while. I did manage to slip and nearly fall into the stream. My blue jeans would carry the muddy evidence of my clumsiness for the rest of the day in the form of wet, brown knee patches. I quickly forgot the mud as I hooked and lost a nicer fish in a temporary high water lie. The golden yellow of his belly flashed as the brown gave me two arced jumps and he was gone.

Working further upstream, I settled into a hole that is another high water treat. It becomes a deeper, slower run than the surrounding areas and can concentrate fish in its dark safety. Three short strikes, and then a pair of browns were landed in quick succession. The fish were energetic and so pretty. Amazingly, I conjured another two hookups from the hole, resulting in tiny leaping browns, but both shook the bugger. 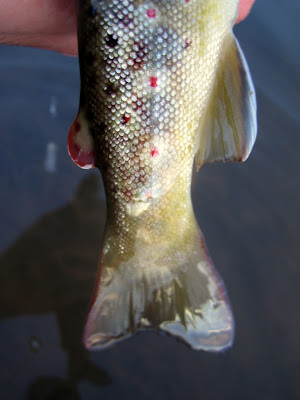 The sun was waning and one last hole beckoned for some attention. The Heron Hole is a good one and there is a large brown that tends to reside there. On the second cast I had a massive wake following my bugger downstream, but no take. The trout scurried back to his lie and after a few more casts, I packed it up and headed home to some new pants and an Isolation Ale.
Posted by wyoflyfish at 5:05 PM 1 comment:

George and I headed out early in the morning with all the promise of the new year upon us. Our initial lake selection was a wind storm, so we back tracked to a lake that was surprisingly calm in comparison. The wind eventually hit us for a couple of hours but not until after we were all set up and fishing.

The fish were moving around and we saw plenty of them down the holes but takes were few and far between. I managed to mishandle at least three takes and that was all I could seem to do. George fared better hooking a few others including a big brute that slipped him during battle.

Another great start to the new year, we never saw another person all day long.

The moon setting to the west after we set up 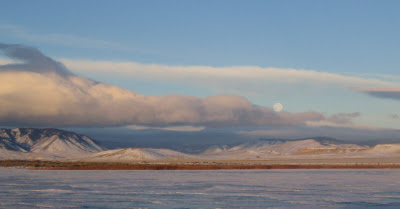 Standing our ground in the wind 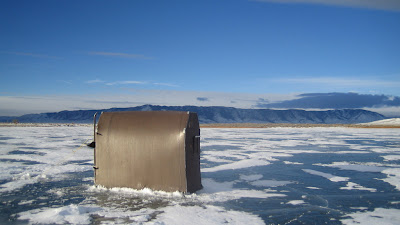 One rainbow that didn't manage to get away from George 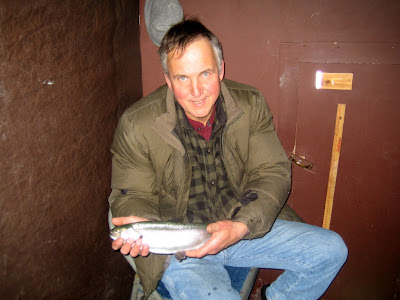 Posted by wyoflyfish at 11:47 PM No comments: