I interrupted my slumber at 1:00AM to make an attempt at spotting the Leonid meteor shower as the peak was supposed to be occurring early Tuesday morning and I wanted to see if I could get one on camera. The skies were clear and I had a decent viewing location from the kitchen with a good angle on the constellation Leo, which was supposed to be the radiant for the meteors. I was shooting 15 second exposures off a tripod at ISO200. Unfortunately, my little point and shoot cannot handle any longer exposure than that so I was limited, but just kept firing away hoping to catch one on film. I spotted some nice meteors with a very spectacular one about halfway through the time I was watching. It was out of my camera FOV though. I retired at 2:15AM as I had only seen one in the last 15 minutes of my watching. This morning while reviewing the pictures, I did have one faint capture of a Leonid on the camera. It wasn't much but I was happy to have some evidence of their presence in the Wyoming skies. 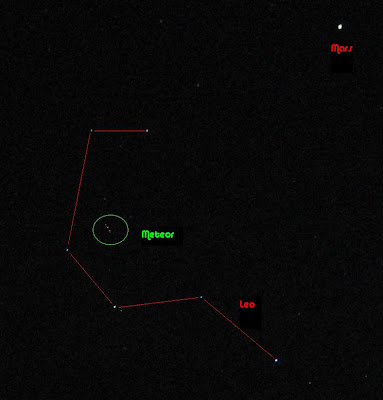 Posted by wyoflyfish at 8:24 AM

the leonid shower is usually a good one. this is the first year we haven't tuned in to it in a few years. long, uninterrupted sleep has been hard to come by the last few months, so we couldn't pry ourselves out of bed for the shower only to be waked a little while later by a hungry boy. glad someone took it in.

I wish that fireball like one had been in my camera FOV. It really made the night to see it. The best one I have seen in a few years.

You need to take your sleep while you can get it that is for sure :)