Here is a video from the outing on the 21st. A nice rainbow that takes George's ice rod for a ride down the hole. He was able to grab it and save it arm deep in the water at the last second.

First Ice Trip Of The Season

I had a beautiful day on the ice with George. We were able to get out early and spend a good amount of time on the hard water, left in the early morning blackness and got home in the evening darkness. The day was quite an adventure with big rainbows coming in to the hut on a consistent basis. I couldn't do much of anything but George managed some gorgeous rainbows and we had quite a time wrangling them in the hut. He also was able to save a rod that had tangled on a just released fish just barely grabbing it with a lucky arm into the icy water. I shot a few pictures and some video during the day. I think I may have a taste of ice fever.

A nice rainbow on the ice 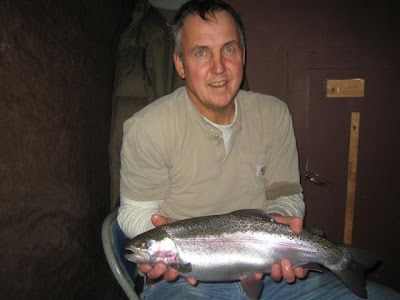 Releasing a rainbow back into the lake 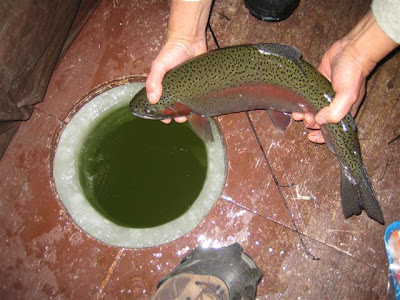 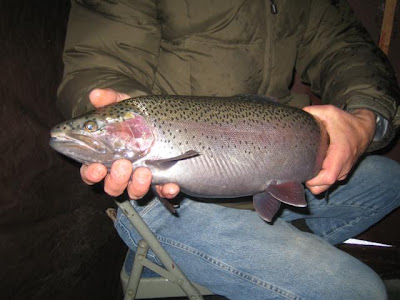 Now that the ice has set in on the lakes and freestone rivers, the winter season is upon us and it's time to get out and explore the possibilities for other open waters that often get overlooked during warmer months of the year. Little stretches of streams that become my havens during the winter to sustain me through the long droughts between trips to the reef or other well known tailwaters.

Micro-tailwaters: these little winter locations that act as an oasis for fly fisherman and wildlife alike, get an awful lot of my attention in winter. They can be found in close proximity to just about everyone with a fly rod, but receive very little pressure or interest. The conditions to create them are easily found on any topo map. Locate a municipal reservoir and find either public access below it or a cooperative landowner and you have the ingredients for your own little three weight winter nirvana. 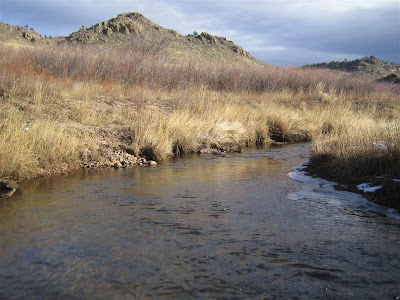 I took a day trip to a little stream I fish during the winter to see how it was faring. I hadn't visited since the last waning months of the previous winter and the urge to get out was too great to ignore. On the way to fish I passed a reservoir where I spotted a nice buck mule deer that had apparently been hit by a car and ended up out on the ice where he died. I called it in to Game and Fish and they sent two wardens who came out and got it.

After that it was on to the stream where it was much more iced up than I had imagined it would be at this time of year. The primary reason being that no water was being released upstream. The existing flow that I was able to fish was due solely to some of the spring fed elements that also provide water to this little creek.

Picking my way upstream I was able to find a few small rainbow trout willing to take the hot head leech. The water is very shallow and clear and the bead head on the hot head leech pattern is enough weight by itself for the thin water. I fish no indicator as well and try to spot the fish strike or watch the end of the line while working holes or dark areas. Indicators just spook the trout and additional weight causes unnecessary snags in most of these streams.

The 3wt and fly selection


Some of these tiny gems were pretty little parr marked beauties.


The big holes created by beaver dams were all iced over and once I had fished up to where solid ice made up the majority of the stream, I had lunch where I parked and then went exploring. I got up higher on the saddles above the canyon and found a small group of mule deer, picked up some ancient trash that was lying around and at the end of the day spotted a group of eight wild turkeys. A nice day trip, full of fishing, exploration, and just being afield to take in the warmth of a mid-40 degree day during the shortened daylight of December. I couldn't have asked for more than that. 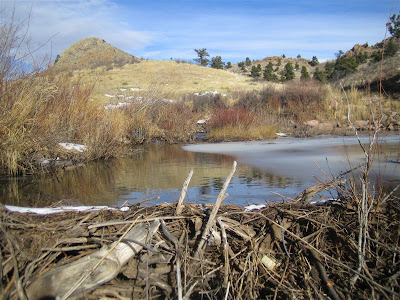 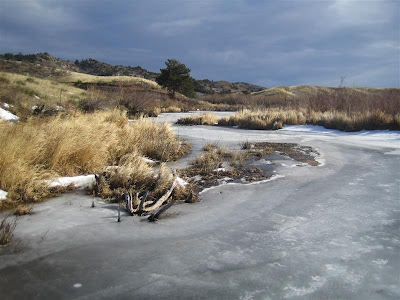 Wild Turkeys in the high country

Posted by wyoflyfish at 10:28 PM No comments: