Adam was intrigued with my earlier success this month hitting lower lakes before you would traditionally think they would cool off temperature wise and warm up for fishing action. We launched the drifty and had a grand day of nymph fishing under indicators. We seemed to be constantly hooked up. Midges were taking the majority of fish with some PT takes mixed in. Quite a number of cutthroats on this trip too in comparison to earlier in the year.

My first fish of the day had hooking damage and a large piece of the gill plate missing. Poor guy was still a pretty looking brown though. 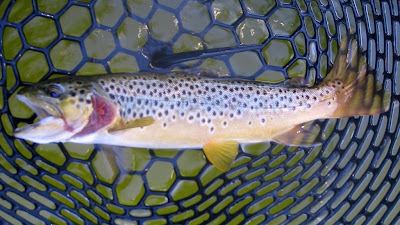 Some of the nicer fish we were finding 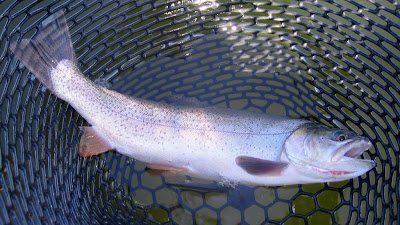 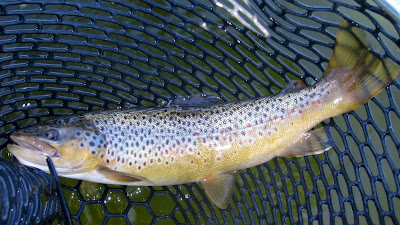 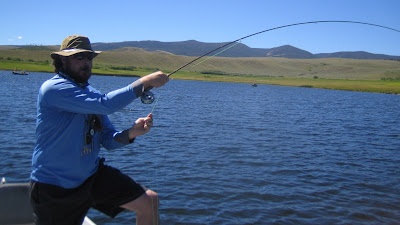 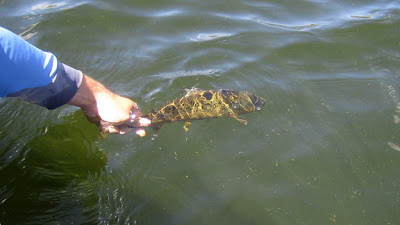 We kept getting "Colorado'ed" by other boats 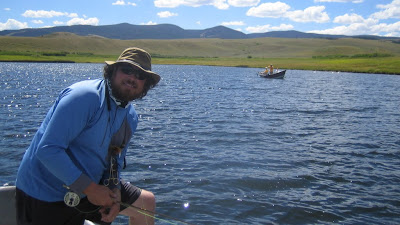 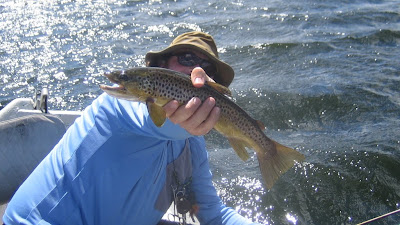 Here is a pair of late day doubles, Adam unfortunately won large fish in each matchup. 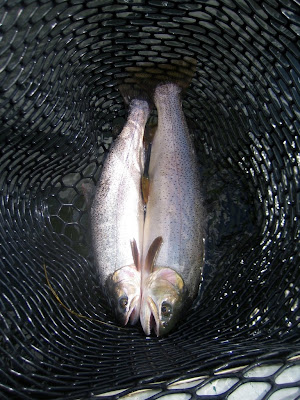 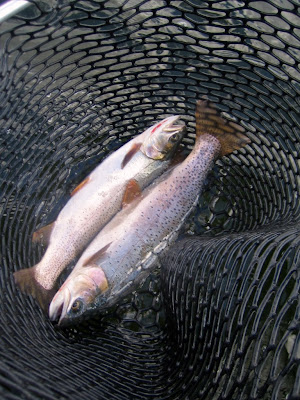 Posted by wyoflyfish at 10:35 PM No comments:

Floyd and I headed into the mountains with thoughts of trying a lake known to have golden trout residing in its clear, cold waters. We hit a little snag though along the road (or lack there of) to the lake as it got a little muddier and rutted than we wanted to try to pass through. 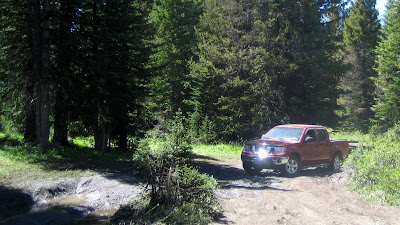 We put plan B into action and got the float tubes on a different lake that neither of us had ever tubed on before. 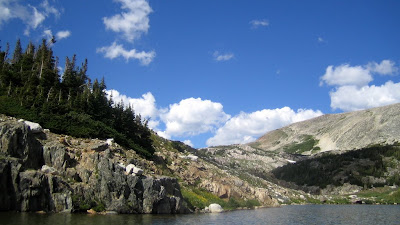 The fishing was a bit slow and I had a couple hits but landed nothing. I explored an old mining site for a little while located on the edge of the lake while Floyd found one nice brookie. 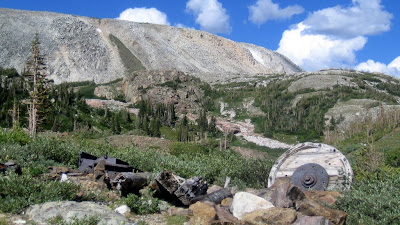 It was decided a move was in order to get into more trout. Our plan C hit pay dirt and we had a fast paced evening of catching trout on various dries thrown on 3 weights. The top water bite got particularly good later in the evening. We found it hard to depart but we had both had more than enough good fish on the evening and with the cold evening shadows of the mountains dropping the high country temperature, the trip back down to the plains seemed in order.

A couple of the trout we were able to find. We both had some rather nice splake in the 15 inch range taking dries. That was a nice surprise at this lake and they definitely were the best fighters in the bunch. 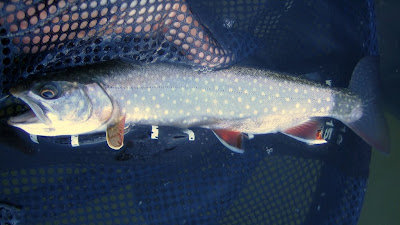 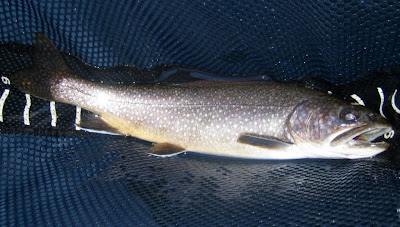 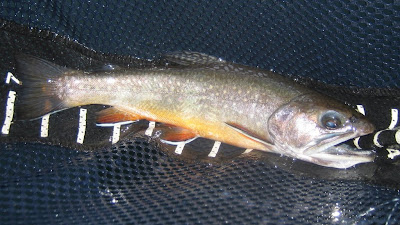 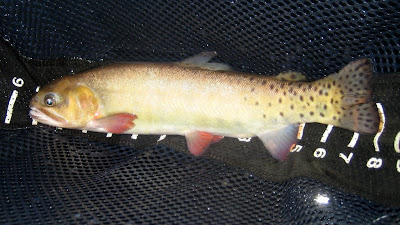 Posted by wyoflyfish at 10:59 PM No comments:

I got up in the pre-dawn morning to catch the peak of the Perseid shower and had a nice time viewing this year. Skies were filled with patches of clouds when I went to sleep on the couch. My watch alarm went off at 3am and I got up to perfectly clear, dark skies. The viewing was great this year and I counted 31 with 3 of them being nicer bright ones in about 45 minutes of sitting on the deck. I tried to get a lucky capture on the camera again this year but wasn't able to have it pointed the right direction at all this time.
Posted by wyoflyfish at 9:52 PM No comments:

I had talked to Eric about trying to get out on Saturday, but we were both looking for something a little different than the high country. We decided to check out a lower level lake that, if the water is cool enough, can be very entertaining with brown trout and snake river cutthroats both providing strong fighting opportunities. We arrived and put in with the float tubes. This lake has good callibaetis and midge hatches as an almost daily occurrence. We never did see any callies come off today, but the consistent action on midge patterns paid off for a nice day from the float tube. We both took various browns and a couple cutthroats showed up throughout the day. I am glad we took a chance at lower elevations even with the risk of possible warm water. The temps were nice and cool and the fish responded and rewarded us for our gamble. No monster fish today, but many 13-16 inch trout willing to jump, fight, and entertain us. 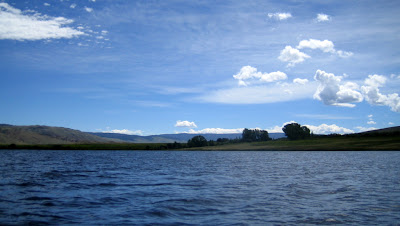 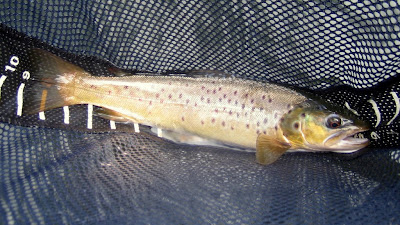 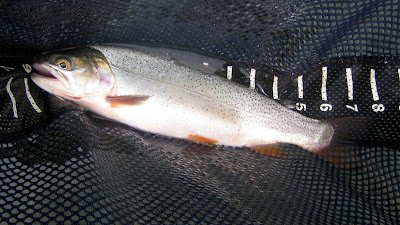 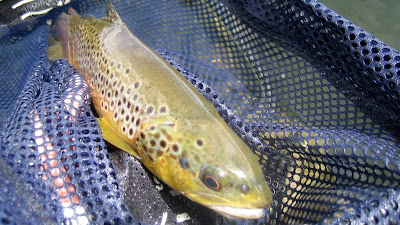 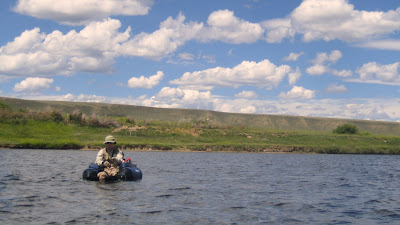 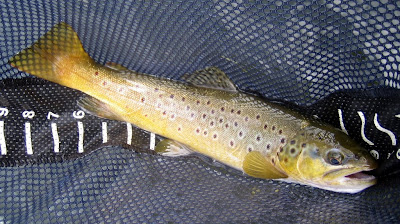 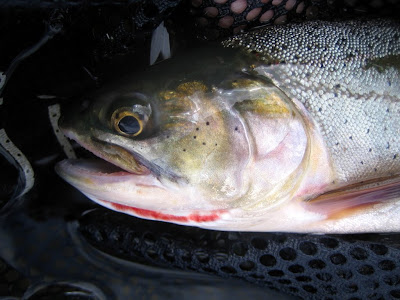 Posted by wyoflyfish at 11:14 PM No comments:

Kicking In The Rain

I was anxious to try for some big rainbows on top water at dusk and foolishly ignored all the signs of a large valley rainstorm that was pummeling the area this evening. While telling myself it would clear, I packed up the vehicle with the float tube and a couple rods to go find a rainbow willing to take a big cicada or hopper up on top.

After arriving at the lake, it was obvious the storm wouldn't pass by anytime soon, so I made a run at it and fished from the tube while finning through the storm. It was a light rain most of the time and did eventually break near dusk for about half an hour. I thought it would trigger a good bite, but nothing ever materialized. I couldn't raise anymore than one splashy take on dries and nothing on the typical nymph setup. I did get plenty of exercise searching the lake for active fish.

A shot of the sun briefly breaking through the storm overhead 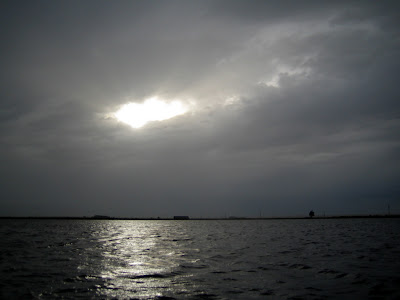